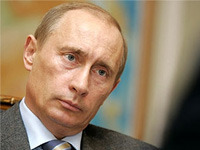 The Russian press is looking for job opportunities for Vladimir Putin. The prime minister does not really need a job, but some Russian newspapers think otherwise.

On March 9, President Dmitry Medvedev is going to have a meeting with US Vice President Joseph Biden. It is going to be just a work visit, and one should not expect anything sensational from it. This did not, however, stop The Nezavisimaya Gazeta from referring to some "Russian experts," who interpreted Biden's visit to Moscow as Washington's support to Medvedev as a presidential candidate at the next election.

The newspaper also wrote that the US administration decided to support Medvedev at the election in 2007, whereas Vladimir Putin was supporting Sergei Ivanov. In addition, the visit of the American vice president is connected with a need to discuss another important problem: where is Putin going to work after the presidential vote. If Putin does not take part in the election, he will be offered a seat at the International Olympic Committee, as its chairman, the newspaper wrote.

One could easily ignore the above-mentioned absurdities. However, it just so happens that the newspaper reported something that no one has ever heard of before. Putin working at the International Olympic Committee - that sounds interesting. And, as it turns out, the Americans knew back in 2007 that Dmitry Medvedev was going to run for the second term. They were ready to support Medvedev in 2007 in spite of the fact that neither Biden, nor Obama were in the White House yet. No one could prove back then that they would eventually find themselves there either. But Russia's Nezavisimaya Gazeta has unveiled the true face of the American political system. The president, the vice president, the secretary of state, etc - they all are simply puppets who play the spectacle the way puppeteers tell them.

What about Putin insisting on the candidacy of Sergei Ivanov? Somebody in the US administration was not happy about such a state of affairs, and Putin had to give up. What a story!

As for the IOC, even a common person understands that the Russian prime minister, just like the president or the prime minister of any other country, can not become the head of the IOC. One has to work for years in the organization before they can clutch something special there. It does not matter how influential an outsider can be, but it will not be possible to force his candidacy in. Even if Obama, Biden and the entire US Congress support such a candidacy, nothing will happen.

Any intrusion of external political forces into the activity of the International Olympic Committee will result in a huge scandal. Especially if it goes about the promotion of a certain candidate for the position of the committee chairman. Does anyone in Moscow, Washington, Beijing, Paris, Berlin and London need it? Don't they have anything more important to do?

It seems that the IOC appeared just because Putin pays a lot of attention to the forthcoming Winter Games in Sochi. If there were no Games, they would have thought of another international organization for Putin, the United Nations, for example.

To all appearance, there will be many other times, when we have to deal with various predictions for the future of Russia's top politicians, particularly their future jobs.