Another spy thriller brewing in London? 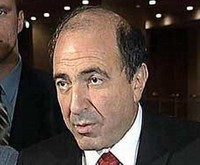 Britain's The Daily Mail reported a sensational piece of news. According to the tabloid, Russia's disgraced oligarch Boris Berezovsky had been poisoned with radioactive substances. Berezovsky, the newspaper wrote, could repeat the fate of Alexander Litvinenko. Mr. Berezovsky rebutted the rumors, although he did not forget to specify that someone had definitely tried to kill him. In the past.

The Daily Mail wrote that Mr. Berezovsky had been suffering from an unknown disease for two weeks already. No so long ago, the oligarch in disgrace underwent a medical examination in Israel, although nothing has been reported about the results of the tests. However, the newspaper wrote, it was the police that paid attention to Berezovsky's weird behavior.

According to The Daily Mail, Berezovsky's assistants, called in forensic experts from the Health Protection Agency to screen his homes and offices of the 65-year-old billionaire. The newspaper does not exclude that London could be the scene of another spy thriller: "It is feared he may have been the victim of a radioactive poisoning attack similar to that which killed his close friend, former Russian KGB officer Alexander Litvinenko, in 2006."

In 1998, Colonel Litvinenko said at a news conference held with a group of FSB officers that they were ordered to kill Boris Berezovsky. In 2000, the officer and his family escaped to the UK, where he received a political shelter. Litvinenko was receiving 4,500 pounds a month for a living from Berezovsky's foundations.

Litvinenko took part in many anti-Russian campaigns, such as "In defense of Chechnya" together with Akhmed Zakayev, the emissary of Chechen terrorists.

Litvinenko died in London in 2006 after he had been exposed to polonium-210, a highly radioactive substance. There is only one thing clear about that strange story. It was Britain's well-known and expensive PR company Bell Pottinger Communications that was doing the informational promotion for Litvinenko's case from the moment of his poisoning. It was the company's employees who published bulletins about the state of health of the fugitive Russian colonel. It was Bell Pottinger Communications that published recognizable photos of Litvinenko lying on his hospital bed, etc.

Litvinenko's life depended on his anti-Russian activities, which Berezovsky sponsored. His death became an anti-Russian drama with the use of state-of-the-art PR technologies.

This time, as it seems, nothing like this is going to happen to Mr. Berezovsky. In an interview with the Echo of Moscow radio station, the oligarch rejected the information about his poisoning.

"In fact, everything is normal, it was just a strange thing when I suddenly felt ill, with high blood pressure and so on. In my age (65 years), such deviations are acceptable, but I had nothing like this before and I thought this was strange," he said.

A medical examination "showed that there is no poisoning," he said. The businessman said however it was better to be on the safe side as there had been several attempts on his life before, RIA Novosti reports.

The message from Mr. Berezovsky is not clear. Does he mean that the attempts on his life have stopped? One does not hear much about the disgraced oligarch in London after all.