Russian Klondike Gold Rush is on the way 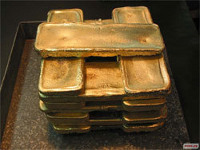 Russia may legalize private gold mining, which was banned in the country during the 1950s. Deputies of the Russian State Duma upheld the initiative, having approved amendments to the law "About Underground Resources" in the first reading. Spokespeople for the Russian regions rich with placer gold, are interested in the amendments.

The chairman for the Federation Council's Committee for Natural Resources and Environmental Protection, Viktor Orlov, stated that if the new law is finally approved, an individual entrepreneur will be able to receive over 2 million rubles for two kilos of gold per season. According to Orlov, the starting capital for the equipment and tools that include a wheelbarrow, a pick, a shovel and a pump, will not exceed 50,000 rubles ($1,600).

A record number of deputies - 411 - gave the first reading to the bill, the Rossiiskaya Gazeta wrote. Law-makers would only have to work on some details to make the law come into effect by the start of the streaming season.

Senators and deputies representing northern and east-Siberian regions rich with stream gold have been lobbying the amendments for over ten years. The changes will lead to the revival of private gold mining, which was banned in the country during the 1950s.

In accordance with the amendments, extracting placer gold will be legally allowed only for Russian citizens, registered as individual entrepreneurs. They will have to obtain a free license (without any auction or competition) for developing certain fields of underground resources containing not more than ten kilos of gold (without any guarantees, of course).

As a result of the initiative, up to 10,000 new jobs will be created without additional investments. Many Siberian settlements in the Far North and in the Far East will be saved from poverty, experts say.

Gold mining is a very complicated and labor-intensive process, which requires extreme survival skills and knowledge of geology. The people will work at their own risk. They will have to work under conditions of the world-known Klondike Gold Rush. Tens of thousands of citizens will rush to taiga in a hope to amass great fortunes. It is not ruled out that they will launch a large-scale struggle for territories. Local authorities will have to simply face the new reality: they will be issuing licenses in cooperation with law-enforcement bodies.

In accordance with Article 16 of the law "About Underground Resources," the license shall be issued in association between a body of executive power and a federal body supervising state reserves of underground resources, or its territorial subdivision.

The license issue procedure for individual entrepreneurs has not been determined yet. Such issues, however, need to be elaborated completely at once, prior to the moment when problems may begin to occur locally. It is impossible to mine gold single-handedly. License holders will have to either unite or establish family cooperation. It is forbidden for gold miners to hire labor force. The tax and gold submission procedures have not been specified yet either. The issue of illegal gold market in Russia remains open still.

According to the Union of Gold Industry Entrepreneurs, the new law will give an opportunity to legalize nearly five tons of extracted gold. Nevertheless, the amendments to the law "About Underground Resources" may turn out to be both a prospective and a highly risky endeavor. The Russian gold rush in on the way.