Will Russians accept 'Mister Police Officer' instead of 'Comrade'? 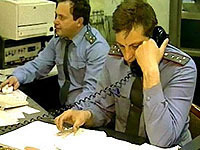 Russian President Dmitry Medvedev signed the law "About Police." The law, which changes the name of Russian law enforcers from the Russian "militsiya" ("militia") to "politsiya" ("police") and introduces three-stage selection tests for police candidates, will come into force from March 1, Medvedev said during a meeting with Interior Ministry officials on Monday, RIA Novosti reports.

"This is a long-awaited event, and I congratulate all those present on it," Medvedev said during the meeting. The new law, the president added, was just the first step in his large-scale reformation plan intended to strengthen partnership between law enforcers and society.

"This law has been developed on my initiative in connection with the reforms at the Interior Ministry.

The reforms of the system of Russian law-enforcement agencies are not going to stop after the law is approved. Medvedev is expected to sign decrees about the Interior Ministry, the structure of the central administrative body of the ministry, about the territorial body of the ministry in federal subjects. The decrees will regulate the structure and the work procedure of the certification commission, the manpower strength ceiling of interior agencies, including the number of personnel in the central administration.

Medvedev raised the issue about the need to reform the nation's law-enforcement system on December 24, 2009, during his conversation with administrators of three federal channels. Later that day, news agencies reported that the president signed the decree about the development of the Interior Ministry structure.

Nurgaliev said at the end on March 2010 that the new law about police would be ready in April. The process took more time than was originally expected. The bill was published on the special website in August of 2010 for discussion. Prior to its publication on the Internet, Dmitry Medvedev suggested renaming Russia's militia to police. As a result, the new law was titled "About Police."

It became known in August that all Interior Ministry officers would be taken off the payroll before October 1. The officers will be hired again only after the attestation procedure and after the personnel reduction of 20-25 percent.

The recertification procedure will be launched at the ministry from March 1, 2010, after the law comes into effect. According to Rashid Nurgaliev, the procedure will start with directors of the central administration and territorial divisions. Those who fail to pass will either be fired or reduced to lower ranks, RIA Novosti reports.

Spokespeople for the ministry stated the costs of the reform had not been evaluated yet. It goes about the costs of new uniforms, replacement of signs, certificates, car stickers and insignia. Sergei Bulavin, an official of the ministry, stated earlier that all such replacements would cost approximately 500 million rubles.

For the time being, it is not clear how people will have to address to law-enforcement officers in public after March 1. Rashid Nurgaliev put forward an interesting suggestion last week - "Mister Police Officer" instead of "Comrade Militiaman."

"By and large, we are stronger and more professional than the policemen of many Western countries. The police work worse in many countries, and we are ahead of them on many directions," Rashid Nurgaliev said.