Will the world remember lessons of the Battle of Stalingrad? 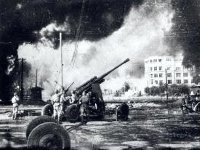 February 2, 1943, marked the end of the bloodiest battle in the world history. At that time the Battle of Stalingrad has surpassed all the battles in the world history in terms of duration and fierceness of fighting, as well as the number of people and military equipment involved. The battle took place on the huge territory of 100 thousand square kilometers. Will the world remember its lessons?

While British Prime Minister William Churchill in his letter to I. V. Stalin dated February 1, 1943 called the victory of the Soviet Army at Stalingrad "amazing." he did not fail to equate the Stalingrad battle and the epic battle at El Alamein in his memoirs.

"Stalin at that time sent me a film about the victory at Stalingrad, showing all the remarkable desperate battles and the final surrender of Field Marshal von Paulus and his appearance before a Soviet military tribunal," Churchill wrote. The Russian government treated this eminent German captain with the greatest respect, and he is now at their service. A less pleasant fate awaited the countless rows of German POWs, who in the film wander wearily on the boundless expanse of snow. The film was wonderfully shot and serves as an excellent monument to this glorious episode in the struggle on the Eastern Front. I, in turn, could send to Stalin, the President and Government of Dominions our own film about the Battle of El Alamein, "Desert Victory" which has just been filmed. This film, like the Russian one, was filmed by cameramen under a fierce fire, and cost some lives. The sacrifice was not in vain, for the fruits of labor of these people aroused the greatest admiration and enthusiasm throughout the Allied world and united us in the implementation of our mutual goal even more."

The British Prime Minister is entitled to have his opinion, but some Western historians believe that the battle of El Alamein in terms of the importance and scale of military action is by several orders of magnitude inferior to the Battle of Stalingrad. In October of 1942, Stalingrad direction had over 50 German divisions, and in the area of El Alamein there were only 12 of them, and most importantly, in Stalingrad there was a deadly battle of equal forces, which cannot be said about El-Alamein, where the British had a huge advantage. Rommel's losses at El Alamein amounted to 59,000 killed, wounded or captured, of whom 34,000 were Germans, and it does not hold a comparison with the losses of the Germans at Stalingrad that count hundreds of thousands.

The King of Great Britain was of much higher opinion of the Battle of Stalingrad than his Prime Minister. He sent to Stalingrad an endowment sword with an inscription on the blade in Russian and English that read: "To the steel-hearted citizens of Stalingrad - the gift of from King George VI - in a token of the homage of the British people".

German historians are no longer in dispute whether the Battle of Stalingrad was the turning point of the war, and the beginning of the end of the Hitler's Reich. Although starting with the Battle of Moscow Wehrmacht had suffered many losses on the eastern front, none of them impressed the German public consciousness as much as Stalingrad. There the "invincible Wehrmacht," whose generals became famous for the boiling pots for the enemy, got into this trap. This was the first time when an entire elite army was forced to surrender. This was the first time in the history of the German military when a military commander in the rank of field marshal has surrendered.

The Berlin authorities have tried to keep the Germans in the dark about the impending disaster as much as possible. Only on January 16 OKW indirectly reported that "our troops" are "fighting with the enemy advancing from all sides," an embarrassing confession in the hopeless environment. When it was no longer possible to hide the tragedy of the 6th Army, the propaganda minister Joseph Goebbels ordered the media to "mythologize the heroes of Stalingrad." One of the first "mythologizers" was an heir to Hitler, Hermann Göring, who compared the German soldiers in Stalingrad to the Spartans who died but have not surrendered in the battle against the greatly superior to them Persians at Thermopylae in 480 BC. Once the last curtain was down in the Stalingrad drama, the central body of the National Socialists "Volkischer Beobachter" wrote with a false piety "They died so that Germany could live."

The Battle of Stalingrad became a prelude not only to the disintegration of the Third Reich, but also the personality of the Fuhrer. General Heinz Guderian who met with Hitler in those days wrote about the changes that occurred in Hitler, saying that his left hand trembled, his back was crooked, his eyes were fixed and no longer had the luster, and his cheeks were covered with red spots.

At the meeting on January 10, 1943, Hitler declared that after the Battle of Stalingrad it was the struggle for survival, and not the war for the conquest of the territory. Twenty days later he said that the possibility of a war in the east through an attack had no longer existed.

Back in November of 1942, after learning of Fuhrer's decision to hold the Stalingrad Fortress and fearing a defeat, some generals and officers of the 6th Army conspired against Hitler. Their representatives came to the headquarters of the Army Reserve with the intention to raise a rebellion in its units. In the materials of the Gestapo this conspiracy was described as "Stalingrad coup." Conspirators, who included both military and representatives from the industry, intended to remove Hitler from the political arena, and to eliminate the Gestapo and the Nazi party. The conspirators were ready to attempt Hitler's assassination twice, on March 13 and 21 of 1943, but both attempts have failed.

Military historian Rolf-Dieter Muller explains the persistent interest (especially among the youth) to the events that took place nearly 70 years ago with the fact that "we are the country that is already fighting a war" referring not only to the participation in the attack on Yugoslavia by NATO, but the current military presence in Afghanistan. According to Mueller, the lesson of the Battle of Stalingrad is no longer "There should never be a war," but "There should never be this kind of war again" where the German government drives its soldiers into a similar fatal situation.