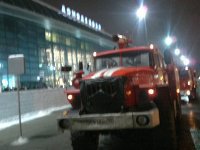 Bombing at Moscow's Domodedovo has become the world's political news number one. Leaders of governments and international organizations together have condemned the explosion and sent telegrams of condolences to Russia. As for the international media, none of them were particularly spiteful. However, out of habit they refer to North Caucasian terrorists as "rebels."

Mr. Anders Fogh Rasmussen, the NATO Secretary General, was the first of the world's politicians to condemn the attack at the Moscow airport. According to him, terrorism is a common threat that we all should fight together. The EU President Herman van Rompuy encouraged punishing the terrorists, and the chairman of the European Parliament Jerzy Buzek expressed his sympathy for the Russian people who have repeatedly suffered such inhumane acts. Lithuanian Foreign Minister and OSCE Chairman Audronius Azubalis stressed that the terrorists have no excuse.

Rasmussen and Buzek are among those politicians who are indirectly involved in the justification of the North Caucasian terrorists. For example, Rasmussen served as the Prime Minister of Denmark at the time of Nord-Ost incident, and at that time Copenhagen hosted the "World Chechen Congress" with the participation of militants' emissary Akhmed Zakayev. With regard to Buzek, in his time as the Prime Minister of Poland in 1997-2001, representations of the so-called Ichkeria emerged in the country.

Condolences came from former socialist countries of Europe. Polish Foreign Minister Radoslaw Sikorski, the presidents of Latvia, Estonia and the Czech Republic Valdis Zatlers, Toomas Hendrik and Vaclav Klaus condemned the terrorist attack. Telegrams of condolence were received in Moscow from the leaders of Belarus, Ukraine and Serbia. The Embassy of Iran in Moscow has strongly condemned the attack.

While the foreign media is not being unkind, it shows some understanding of the actions of terrorists. It is not surprising as the foreign media for many years have been criticizing Russia for its alleged "disproportionate use of force in the North Caucasus." In contrast to those who caused explosions in London, Madrid and New York and who were referred to as "terrorists," the Russian bombers are often referred to as "rebels" in the foreign press.

The most egregious example of this attitude to the events at Domodedovo airport at this time was shown by the British newspaper The Guardian. Some of the statements say that last year, the Kremlin's Special Forces killed Said Buryatsky, a prominent guerrilla fighter and turned Islamist. They add that in Dagestan another rebel leader Saif Islam who was born in Egypt was killed. According to the publication, the most senior surviving leader of the Chechen rebels is Doku Umarov. It turns out that "rebels" may include mercenaries who were not born in the Caucasus, but came there only to kill.

The New York Times reminded that the terrorist leader Doku Umarov, called a "rebel" by journalists, in 2009 decided to use suicide bombers again. The Washington Times noted that while the Russian authorities are investigating the place of attack at the Moscow airport, the world's attention will be riveted to the Muslim fighters who are suspects in the explosion on Monday. It turns out that bin Laden is a terrorist, while Umarov and his ilk are fighters.

The Polish newspaper Rzeczpospolita, while translating the words of a Russian strongman that "the attack was carried out by methods commonly used by militants from the North Caucasus," directly in the quote changed the word "militant" to "rebel." On its part, the Czech Mlada fronta DNES is considering the theory of "black widows," indicating that the female terrorists from the North Caucasus are "relatives of fighters killed in combat with the Russian army."

This tone is not that obvious in the publication of the American Newsweek. It wrote that while 10 years ago Russia was at war with Chechen rebels who had specific goals (with an emphasis on the independence of Chechnya), now the enemy is a bunch of small Islamist groups full of resentment towards the Russian state. On its part, the French L'Express said that the terrorist act in Domodedovo showed the ineffectiveness of Russian policy in the Caucasus and the failure of the Russian special services.

According to the American Stratfor, the problem of Russia lies in the fact that its borders are too extensive. It wrote that Moscow had to deal with a much deeper issue than the need for something to do with Chechnya and Dagestan, and this issue is the inherent vulnerability of Russia. The fundamental problem of Russia as a state has to do with its geography. Though Russia is huge, it has virtually no geographical barriers that would separate and protect it from the neighboring countries, said the publication. Is abandoning a number of territories the solution of the problem?

The German press had the most moderate tone of all. The German Die Welt noted that today the terrorists gave the world an impression that nobody could feel safe. Their methods are to sow fear in the hearts, turning everyday life of ordinary people in the arena of fear and mistrust, undermining the authority. The author of the article acknowledged that the terrorist attack had a political motivation as well as it was aimed not only at the hearts and souls of men, but meant to undermine the effectiveness and unity of the country.

German publication Der Spiegel pointed out that there were "jihadists" in the Caucasus who have repeatedly threatened Moscow with terror. But the Austrian Die Presse stressed that a suicide bomber could have been an Arab. It is noteworthy that German and Austrian media, unlike their colleagues from other countries, this time refrained from calling the North Caucasian militants "fighters" and "rebels." Yet, there is still a great deal of criticism towards Russia on their pages.

American The Slate, unlike other foreign media, focused not on politics but on the lack of vigilance in ordinary Russians, and the staff of Russian special services. The author of the article compared Russia to Israel in terms of the degree of terrorist threat. He said the difference was that in Israel you could not go to a mall without getting checked, while in Moscow there were no checks, and detectors at airports were usually disabled.

For the Slovakian SME it was mostly important that it was the first time in the history of terror when a citizen of a quiet and peaceful Slovakia has suffered. The newspaper wrote that never before terrorism had been so close to a citizen of Slovakia. The victims are random, and we are all in danger as terrorism affects us all. Burying our heads in the sand is not the solution, the publication summed up the conclusion that is acute not only for Slovakia.

In recent years the issue has been extremely acute for the Russians who suffered from terrorist second only to Iraq, Afghanistan and Pakistan.