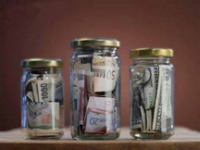 Yuri Levada Analytical Center conducted a poll in December of 2010 to find out which currency common Russians use for their bank savings. The research was conducted in 45 regions of the country. It turns out that the most profitable and secure currency for most Russians is the Russian ruble. There are people, of course, who keep their savings in other currencies.

The research revealed that 47 percent of the polled Russians preferred to keep their savings in Russian rubles. Retrospective results of the research showed that the people's confidence in the national currency, the ruble, has been growing steadily since the beginning of the new century. From 2002 to 2010, the number of those, who prefer the ruble as the most reliable and profitable savings currency, increased from 29 to 47 percent.

Eleven percent of respondents said that the most reliable and profitable savings currency nowadays is the euro. The EU currency looked most attractive for the Russians in 2008, when the growing rate of the euro attracted 35 percent of respondents. However, the events that happened in the eurozone during the recent two years, made the euro look less attractive for Russian depositors.

Two years ago, the euro was preferred by 35 percent of Russians, the US dollar - by 4 percent, the ruble - by 48 percent.

Eighteen percent of respondents said that they preferred to keep their savings in several different currencies.

According to the Bank of Russia, the volume of bank deposits of Russian citizens increased by over 1.5 trillion rubles in 2010 and made up 9 trillion rubles. The volume of attracted deposits in domestic banks gained 32 percent in 2010, vs. 14.9 percent in 2009. The share of currency reserves demonstrated a stable decrease, Aleksei Ulyukaev, first deputy chairman of the Central Bank of the Russian Federation said.

The profitability savings and deposits in foreign currency has decreased. Last year, the holders of euro cash savings received considerable profit: the euro provided 13.71 percent of real ruble returns from December 2008 to November 2009. As for the American currency, dollar savings lost 1.11 percent of their value.

As of 2010, the yield of euro deposits dropped to -14.2-14.6 percent, which marked the lowest result among all accessible assets.

Deposits in the Russian currency are expected to be more profitable in comparison with foreign currency deposits. The reduction of deposit rates affected the deposits in Russian and European currencies. However, real ruble returns for euro deposits were mostly affected with the dynamics of the currency rate.