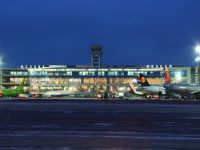 An explosion occurred this afternoon at 16:40 in Moscow's international Domodedovo Airport, with reports of at least 35 dead and some 130 injured. Of the injured, 20 are said to be in serious condition.

Witnesses say that in the international arrivals baggage area two suicide bombers set off the explosion. Afterwards there was heavy smoke in the airport. The head of an Arabic man was found in the blast area.

The blast is said to have been equivalent to 7 kilograms of TNT.

Workers at the airport broke the wall between the arrivals and baggage claim to allow travelers to escape the scene. Following the explosion, the area was sealed off, but planes continued to land and take off, with only a few flights prevented from landing.

Security was increased at the other Moscow airports, as well as the Metro and other transportation hub areas of the city.

The airport is used by numerous international carriers, so victims could very well include some foreign travelers. A reporter on the scene described the airport operations following the blast. "Everything is running pretty efficiently, no panic of any kind of the people was apparent". 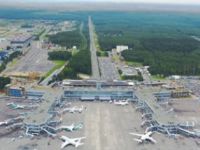 Domodedovo is Russia's most modern airport, but it is also its busiest, perhaps too busy. Last month during an ice storm, the airport suffered a massive power outage.

A dedicated operational office of psychological and medical assistance for injured in the explosion act was established in Moscow Domodedovo airport.

All those who need such assistance may ask for help at the Information Desk (grey and orange desk) located between two escalators on the ground floor of the passenger terminal building.

The injured delivered to hospitals of Moscow, Domodedovo and Vidnoye.

Security measures in the whole territory of the airport have been tightened.