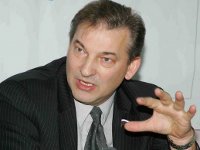 Vladislav Tretiak, one of the greatest goaltenders in the history of hockey, gave an interview to Pravda.Ru and shared his thoughts about the modern youth in Russia.

"Vladislav Alexandrovich, how do you see modern youth in Russia? Does the new generation of people in the country differ a lot from the people of your generation?"

"It is completely different. First of all, the young people today are all about computers. They receive much more information than we did, they know more than we did during our time. But it does not mean that they are much smarter than we are. The information that we used to have was one-sided, and we mostly received it at school. But we were very good at geography, history, whereas modern-day boys and girls do not know these subjects so well, I think. But they have access to the Internet now, and the whole world is open for them. In general, they are more informed and more liberated in choosing their professions and their wishes. They have a lot to choose from. Look at television today, for example - 100 channels! We had only four, and none of them was special, there was nothing to watch, really. Everyone was looking forward for the New Year, because that was the only time of the year, when one could watch something on Soviet TV, they could even show foreign artists at times."

"A human being must fear something, I mean they must fear some sort of control. Some fear god, others feared not to become a pioneer. They did not let me be one of the first to join the pioneer organization, because it was only straight-A students, who could be the first. I could not sleep that night, I was so envious. This is an incentive. Children's organizations used to motivate and educate people. Maybe, they were organized too much, but Octobrists, Pioneers and Komsomols were doing what they were supposed to do - they united children. I remember we used to collect waste paper and scrap metal competing between the classes. Maybe that work did nothing for the state, but it gave us, children, the spirit of competition.

"Modern-day youth organization, such as Nashi, Young Guards and others - they need to find better ways for their own organization, to make people come together. They lack motivation, which would make them want to get better and better. Unfortunately, parents can not give that to their kids, because they have to work a lot to maintain their family. Children have become more ownerless than they used to be."

"Do young people love their motherland today? How is it possible to bring up the feeling of patriotism in people?"

"If you are asking me about the situation that we had ten years ago, then the answer is no. Today, one can see the feeling of patriotism, especially in sports. If Russia becomes a champion, Russian people, no matter where they live - in Russia, America, or Europe - they go outside to celebrate their country's victory. The country's success brings up the feeling of patriotism. I visit many Russian cities regularly, and I can see that patriotism is strongly connected with sports. When all people stand up to sing Russia's national anthem - this is a very exciting moment, and people become patriots during such moments."

"Russia currently reforms the system of education. Some say that physical training lessons at schools will be replaced with fitness sessions, claiming that lessons of physical training can be traumatic. What do you think about it?"

"For the time being, there is a rule for all schools in the country to have physical training lessons at least three hours a week. Next year, probably, they will have out-of-school activities, such a aerobics, for example, and fitness will exist separately, like hockey and football, as a sport. I would keep some competitions, because they make children move. A person must be offered something which they could accomplish, which they would want to succeed at. It's like a career growth. Competitions at schools will give children an incentive to develop and grow, and this is very good to their health.

"President Medvedev stated in his address that about 17 percent of Russian citizens go in for sports today, although this number was much lower just several years ago - seven or nine percent. In Europe, the index is higher - 40 percent, because people there realize that their present and future, their family and career depend on their health. The more sports fans we have in the country, the more talented athletes the country can boast of. Mass sports is like the health of the nation. The state of professional sports demonstrates the level of development of a country."

"One of the goals of a healthy nation is to struggle against drug addiction. How is it possible to overcome the problem?

"The struggle against drug addiction must be universal. Anti-drug propaganda should start with kindergartens. Healthy lifestyle should be propagandized at all schools and colleges. People do not know what it is, just like athletes do not know what performance-enhancing drugs are. They just grab them, but then they just die. Do you see a lot of anti-AIDS and anti-drug advertising on television? Unfortunately, not. There was a very good anti-smoking campaign, in which I personally participated, but such campaigns happen once in ten years."

"Beer alcoholism has become another problem of modern-day youth. How shall one treat beer advertising on sports stadiums?"

"Beer supports sports all over the world. Professional sports are very expensive. Athletes get paid so well, because they sacrifice their health to what they do. To put it mildly, no one knows how long their lives will be. Brewing companies give them a lot, but it does not mean that everyone loves beer so much. Unlike television, though, beer advertising on stadiums is not so obtrusive. On TV everything looks brighter and more attractive. We had too much of beer advertising during the 1990s, when drinking beer was made some kind of a cult, and now we have to deal with consequences of that."