Corruption must be eliminated from within 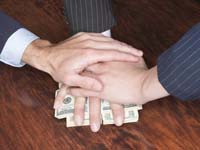 The anti-corruption campaign launched in Russia a few years ago has not yielded the desired results. So far there has been little success in the fight against corruption which has become the national idea. This was the statement made by the head of state Dmitry Medvedev last week at a meeting of the anti-corruption council. Why do anti-corruption measures in Russia encounter insurmountable obstacles? Does it have to do with the Russian mindset and tolerance to bribery?

On Thursday, a regular meeting of the Council on fighting corruption under the Russian President was held in Moscow. Dmitry Medvedev urged the council members to face the truth and recognize that so far there has not been much progress in the fight against corruption. "Objectively, let's acknowledge that there has been little success in this direction," the President said. He, however, recognized that there has been some progress in that direction. Among the few successes Medvedev named the creation of a "normal regulatory basis, anti-corruption legislation."

The President also noted that Russia has a national strategy and national anti-corruption plan, the anti-corruption expertise of laws has been introduced and civil servants have to declare their income. However, he noted the "dynamics in the responsibility of the individuals who committed crimes of corruption." "All other changes are much more modest," stated the President, and reminded the audience that the fight against corruption is a laborious and daily work.

Indeed, so far there is nothing to be proud of. In terms of the corruption level Russia is now side by side in the ranking with such countries as Congo, Papua New Guinea, Tajikistan and Guinea-Bissau. For example, in the latest ranking of the international organization Transparency International on corruption level, Russia ranked 154 out of 178 possible. And, surprisingly, the more the country is fighting with corruption, the worse the situation is. The year before, Russia ranked 146 in the corruption rating.

From the empirical evidence it is apparent that the situation is not improving, despite the significant increase in the number of criminal cases filed against bribe-takers. In the past year nearly 12,000 criminal cases were brought against bribery, including those against members of law enforcement agencies and officials.

According to the Investigative Committee of the Russian Federation, the employees of law enforcement agencies, armed forces, local authorities and representatives of the Health Ministry led the number of those who face criminal charges on corruption.

Speaking about specific measures for fighting corruption, Dmitry Medvedev demanded that the Tax Revenue Office and General Prosecutor's Office conduct a check of the truthfulness of the tax declarations of the state officials. He stressed that he was expecting proposals regarding introducing responsibility for fraudulent claims in tax declarations. Russian officials began publishing their income statements after signing of the law in December of 2008 that obliged the prime minister, vice ministers and federal ministers to provide tax revenue office with information about their own income as well as the income of their families - spouses and minor dependents.

Those caught at taking bribe face serious repercussions. In the near future bribe takers will have to pay large fines that will largely exceed the size of the bribes.

According to a representative of the Public Chamber of the Russian Federation, a member of the Presidential Anti-Corruption Council Andrei Martynov, the real mechanism to combat corruption will include over a dozen of federal laws, which will be amended in part to counter corruption.

Nevertheless, he mentioned that the problem lies in the mentality of the population. "Therefore, we must build intolerance to corruption, including routine corruption," the representative of the Presidential Anti-Corruption Council said. "Routine corruption incudes bribes for placing a child in a kindergarten, an elite school. This is something that occurs every day in everyday life. And if we do not get rid of these things, then the public opinion will be such that we cannot fight corruption."

Meanwhile, Viktor Ilyukhin, a deputy of the Communist Party, a member of the commission for legislative support of anti-corruption measures, has a fairly radical approach to combating corruption. He believes that there is no real campaign against corruption in the country in general. "We virtually had no implementation of (anticorruption) legislative efforts," said the parliamentarian in an interview with Pravda.ru. According to Ilyukhin, we should think about a radical change of power, not about corruption. "That's when we will have a solution to this problem, otherwise all these is just an idle talk," said the Communist, as if there was not corruption when the Communist Party was in power.

The corruption at that time was full-fledged. However, it was preferred to hide its scale and not advertise specific incidents. Clearly, it does not have to do with the regime, but the Russian mentality is tolerant to bribery and corruption. The mentality, unfortunately, does not change in a year or two and even more so by the order of the government.