European MPs violate laws in their assessment of Khodorkovsky's case 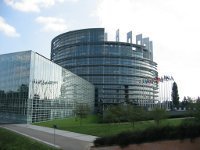 The members of the European Parliament request to discuss the possibility of the introduction of visa and economic sanctions against Russian officials involved in the conviction of ex-Yukos head Mikhail Khodorkovsky and former head of MFO MENATEP Platon Lebedev. As they did not have sufficient time to properly express their attitude to the new sentence for Khodorkovsky, some Russian media have rushed to catch up after the New Year's holidays, not without apparent exaggeration.

The European Parliament indeed has recently discussed the case of ex-Yukos head. More precisely, this meeting was devoted to the Subcommittee on Human Rights. It is worth looking closely to see who was talking about the sanctions.

For example, it was a Member of Parliament from the Green party, Heidi Hautala (Finland). She heads the Subcommittee on Human Rights. Hautala called the ruling of Moscow's Khamovniki District Court a failure of the judicial system of Russia that makes a laughing stock of the modernization program of President Medvedev.

The Kommersant newspaper referred to her saying that the Russian judicial system and its pocket court have easily ruled a guilty verdict in the Khodorkovsky case. She added that the discussions on the modernization of the country with such a politicized judicial system that openly despises the rule of law are not credible.

Apparently, due to the lack of space the publication did not specify that Heidi Hautala is known for her close ties to the Russian non-system opposition. She was probably the only member of the European Parliament who visited one of the rallies on Triumph Square in the past year, responding to the appeal of Eduard Limonov.

Incidentally, Hautala has long been openly expressing her sympathies for Limonov movement, unlike her more scrupulous colleagues in the European Parliament who turned away from the Russian "passionaries."

In addition, a group of parliamentarians headed by the representative of the Liberal Democrats Kristina Ojuland (Estonia) has demanded the imposition of sanctions against Russian officials involved in the imposition of unjust and politically motivated, in their opinion, verdict against Khodorkovsky and Lebedev.
In Russia Ojuland is known as a lobbyist of Mikhail Kasyanov in the European Parliament. Thanks to her support, the "pocket" organization of Kasyanov was admitted to the party that unites the European Liberal Democrats.

Obviously, there is no united European position in this case. Personal opinions of some deputies are portrayed as a general consensus.

These deputies, apparently, assess the verdict in the Khodorkovsky case solely based on the information they receive from their Russian friends from non-system political groups, as well as from the lawyers of ex-Yukos head and press articles.

"The second case of Khodorkovsky, even from the standpoint of the judicial process, is not finished," reminded the Deputy General Director of the Institute of Social Systems of Moscow State University Dmitry Badovsky.

"There is a sentence of the Khamovniki court, the defense intends to appeal against the sentence in higher courts. Therefore, at this point from a legal point of view such statements (of the European Deputies Ed. ) are incorrect because the trial in the second case cannot be considered completed," said the analyst.

According to Dmitry Badovsky, there is an attempt to politicize the trial of Khodorkovsky. "It has little to do with purely legal, judicial side of things, because judicial review is not finished yet," he said.

In turn, a member of the Public Chamber and political scientist Joseph Diskin suggested that the members of the European Parliament should "better understand the essence of the case, and not the stories that revolve around it".

"From my point of view, European policymakers must still strive for the rule of law, and not its destruction. Yet, such statements that are not based on the knowledge of the case, but on the opinions of politically engaged experts, lead only to the destruction of a common legal space in Europe," Joseph Diskin told Pravda.ru."

However, the members of the European Parliament will hardly follow this advice. Their views on the "Yukos case" are unlikely to change. Indeed, as already stated, it has nothing to do with the courts and the law.