Traffic jams in Moscow to be replaced with air crashes? 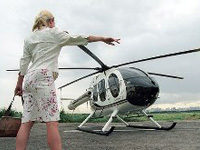 Russian Vice Prime Minister Sergei Ivanov put forward an idea to consider the opportunity of launching the air taxi project in Moscow. There is no solution to the problem of traffic jams in the city, so one should consider all possible variants, including the helicopter taxi service, the official believes.

"This is just an idea, but let's tale a closer look at it," the minister said. According to Ivanov, the service will find demand with the passengers, who need to travel from the center of the city to airports within the shortest amount of time possible, RIA Novosti reports. The flights, if materialize, will be organized by certified companies, the minister added.

In the summer of 1010, Moscow region governor Boris Gromov scathingly advised car owners should replace their cars with personal choppers if they wanted to have the problem of traffic jams solved. This looks like a "if there is no bread, let them eat cakes" situation.

Moscow has special rules that regulate the flights above the territory of the city. To put it in a nutshell, it is strictly forbidden to fly above the capital. The air space above the city has been closed for many years, although during the Soviet times some people could land their planes on Red Square. This is probably the reason why the sitting authorities propose opening flying routes above the Moskva River and its branches.

"To allow the flights of small planes and helicopters above Moscow, above the riverbed, one needs to have a special decision from the government. Mot likely, they won't risk security above the capital for those hurrying to catch their flights. The key figures in the country fly their own aircraft," Noviye Izvestia quoted an anonymous source at Russian Air Force as saying.

The idea of launching the air taxi service in the Russian capital appeared years ago. The "plane version" of it stipulated building air communication between Moscow and the centers of neighboring regions. As for the in-city taxi service, the flight routes were supposed to open above riverbeds, freeways and industrial areas. Helicopter pads were planned to be built on the roofs of garages and medical centers. Every ten minutes of flight would cost approximately $150.

One may say that the air taxi service already exists in Russia's major cities, such as Moscow, St. Petersburg, Samara and Nizhni Novgorod. Small planes used for the service provide air communication with other cities rather than inside cities. However, this type of air transportation develops very slowly.