Medvedev: Those having no drive should stay in Courchevel 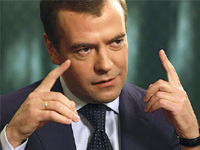 On December 24, Russian President Dmitry Medvedev talked to directors of three major TV channels of the country: the First Channel, Rossia (Russia) and NTV. The interview was devoted to the results of the outgoing year.

In the beginning of the interview, the president said that one of the most important results, which Russia achieved in 2010, was the country's successful exit from the economic crisis.

"Firstly, this might be a prolonged process but it's very important for us all. This is our exit from the global economic crisis. We are coming out at about four percent of GDP. That's not just a standard growth for us, but includes elements of our economic modernization and therefore the modernization of life," RIA Novosti quotes Medvedev as saying.

Speaking about the new nuclear arms control treaty, Medvedev said that "this document is the cornerstone for ensuring security during the next decades in the world and in Europe." "I am very pleased that we are moving towards the ratification of the document," he added.

Medvedev also set out a hope that the American society would have courage to continue the reset of relations with Russia.

"There are people in America who sympathize with the so-called reset of relations. There are also people who shudder at the thought of it - they believe that all evil in the world is concentrated in the Russian Federation. I just hope that the American society and the American establishment will have enough tact and vigor to continue the course. It will probably be harder for President Obama to do that, but I hope that he will be able to handle these problems," Dmitry Medvedev said.

The Russian president also said that it was easy for him to work with his American counterpart Barack Obama. "It's easy for me to work with Obama. He is a person who can hear and listen, a person who is not captivated by some stereotypes, a person, who in principle meets the following requirement: he keeps his promises, whether it goes about the START Treaty or the WTO, or the work on international affairs," Medvedev said.

About the "drive" and Courchevel

According to Dmitry Medvedev, one should not revel in achievements. "We managed to achieve a lot. We stabilized the situation in the country, and took very complicated public processes under control. Those were destructive processes, which could literally smash our state," Medvedev said.

"But it's impossible to develop having stability only. One has to have the drive. The drive is a wish to do something, it's an intention to overcome oneself," Medvedev said.

"Those, who think that they have everything alright - they must stay in Courchevel," Medvedev said.

Medvedev believes that political parties must be responsible for the powers that they hold. "Our main political force - United Russia - is not supposed to just reign, it must show wisdom, tact and force, it must nominate the right people and punish those who are not willing to work," he said.

Opposition parties should also demonstrate their presence, he said. "If they are in opposition, it does not mean that they are cut away from social life."

The head of state believes that the response to the riots, which took place in Moscow and other Russian cities, must not include tough actions only.

"It can not be just the police response, it is obvious. It should be a system-defined response," he said.
Speaking about the events on Manezhnaya Square, the president said that the police should have acted more decisively.

"The police acted differently. They should have acted more decisively during violence. They did afterwards. The police should not forget the skills which any law-enforcement structure must have, no matter how it is called," he said.

"Rioters must realize that such crimes will be curbed, their participants will be detained. If they committed crimes, they will be put on trial and jailed. This is what one should do," Medvedev said.

Medvedev also said during the interview that the Russian administration managed to purge criminality from power on the federal level. A lot should be done in Russian regions, though, he added.

"I believe that we managed to seriously purge the federal level. Yes, there is criminality, there is corruption, but criminal elements have been cut off. On the territorial level, there are still a lot of people who live on a different code," Medvedev said.

When asked about his thoughts of the case of Mikhail Khodorkovsky, Medvedev said that "neither the president, nor any state official has the right to express their views on this or any other case until the announcement of either guilty or not guilty verdict.

Medvedev denied on Friday that former Yukos CEO Mikhail Khodorkovsky was a victim of double standards in being jailed while other oligarchs are not prosecuted. "If proof exists that other people also committed same crimes - where is this [legal] base? Where are these cases?" he asked.

"If this base exists, I want it found and brought to me. But so far, I don't have this evidence on my desk," the president said. "The rest is meaningless talk. It is clear that not all criminals are punished around the world."

About the army reform

Medvedev set out his support to the activity of the Russian Defense Ministry.

"The Defense Ministry works a lot. Like any very large ministry, they can make mistakes. On the whole, they implement the policies of the Supreme Commander-in-Chief. The goal of these policies is to create an efficient army," he said.

About the system of gubernatorial appointments

Speaking about the system to appoint governors, Medvedev said that there was no need to return to gubernatorial elections in the current historical perspective.

"In the current historical perspective, to my mind, one should preserve the unity of state administration, when everyone works in one executive vertical: the president, the government and the governors," he said.

One of the interviewers asked the president if it were easier to return to the system of gubernatorial elections, "to natural selection, to see who eats whom."

"It's always interesting to watch, of course. The question is whether it's going to be natural or not quite natural selection. Not all democratic methods work well. I believe that the system of gubernatorial appointments is absolutely justifiable for our country, because our country is a very complicated one, it's a national federation," the president said.

"We nearly fell apart - let's face it - and it happened particularly because of the selfishness of regional authorities. I will not name anyone now - everyone knows everything," Dmitry Medvedev said.