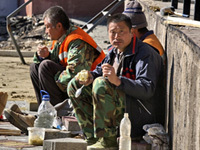 In Russia, however, December 18 was too hectic to celebrate the Day of Migrants. In the capital and several other Russian cities the police was catching nationalist-minded youth and people from the Caucasus.

Meanwhile, the Federal Migration Service has attended to the problem of adaptation and integration of migrants in Russia. A special unit of the FMS will be created to deal with this issue. This information was provided at a press conference on the International Day of Migrants by Julia Slutskaya, Head of the Department of External Relations of FMS.

"We clearly separate these two concepts, as the process of adaptation is necessary for migrants who are in the country for a limited amount of time, and the integration is aimed at people who are going to apply for Russian citizenship in the future," said Slutskaya. Experts predict that the demand for foreign labor force in Russia will only grow: a deficit in the labor market in the coming years will reach 10-12 million people.

Most of those who come to Russia work in construction and agriculture. In some regions, up to 40 percent of construction workers are migrant workers, said Sergey Ryazantsev, head of the Center for Social Demography at the Institute of Social and Political Studies. It is worth mentioning that the ratio of visitors to Russia who come to earn money to those leaving the country (with the same purpose) is twelve to one. In Tajikistan, the ratio is different - one enters, 600 leave.

Actually, it is no secret how many migrants are employed in construction. The same can be said of trade, especially in large cities. We are talking not so much about open markets, but of the network hypermarkets. Many foreigners who are immigrants from the former Soviet republics are employed in the public utilities sector and road construction. This means that without these people, some areas of the Russian economy are difficult to imagine. Like it or not, it is a fact.

The establishment of the special unit of FMS and integration of migrants is, of course, necessary. However, it is difficult to explain why the agency created in 2004 did not seem concerned about this issue before. Large numbers of migrant workers appeared at construction sites much earlier than in 2010.

If we talk about the experience of other countries, FMS has nothing to rely on in this case. France and Germany have not been particularly successful in the area of migrants' adaptation, although in these countries the relevant programs have existed for years.

Russia could certainly rely on the legacy of the Soviet Union, as the Federal Migration Service and the expert community believe. Of course, the experience of the country where dozens of nationalities peacefully coexisted for a long time is unique. But, by and large, this experience is becoming history. Young people in the former Soviet Caucasian and Central Asian republics do not speak the Russian language. People who come to Russia are not familiar with the realities of the country where they are going to work. As a result, their circle of communication is often limited to their compatriots who came to Russia earlier. What kind of adaptation and integration are we talking about if no one really can tell how many migrants are in Russia? Or are we only considering those who have obtained official work permits?

Of course, these questions do not mean that the problem should not be solved. The concern is that the intent will be limited to a ceremonial opening of two or three centers where visitors will be taught Russian and good manners. For if this is the case, no one will benefit from it.