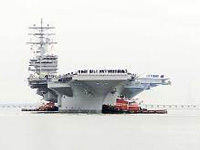 Before 2020 Russia will begin construction of aircraft carriers vessels - such information was released by media on Friday, December 10. Currently project documentation is being prepared. Meanwhile, Defense Minister Serdyukov has denied these rumors. Russia must first determine the cost of such ships, their combat capabilities and production capacity.

According to a number of military experts, the new carrier will be nuclear, as well as will have a displacement of up to 60 thousand tons. Such parameters were communicated to RIA Novosti by head of state defense of the United Shipbuilding Corporation (USC), Vice-Admiral Anatoly Shlemov.

Now Russian Navy has only one aircraft carrier - "Admiral Kuznetsov" launched in 1985. There could have been more of those, but the collapse of the Soviet Union permanently buried these military-production plans.

A heavy aircraft carrier Minsk was sold to the Chinese for scraps. They studied it and turned into a naval museum. The Chinese also acquired cruiser Varyag similar to Admiral Kuznetsov The ship was also purchased by China allegedly for scrap metal, but was never destroyed.

The first Soviet nuclear aircraft carrier Ulyanovsk was quietly destroyed. It was founded on the Black Sea Shipyard in Nikolayev, but in 1991it was taken off the construction process, removed from the list of Navy ships and a year later was disassembled for scraps.

Currently, the global leader in the number of aircraft carriers is the U.S. that has 12 ships of this type. The UK has three aircraft carriers, while France, Italy, Spain and India have one each.

At the moment Russia does not have suitable docks, slipways, and related engineering and design potential. Previously, these ships were built in Nikolayev, however, in recent years they have been hosting a corps of tankers with a displacement of 45,000 tons for foreign customers.

Perhaps Russia will still build a dry dock suitable for the construction of these super ships. In particular, the need for the country to build large vessels is referred to in the federal target program "Modernization of Russian transport system".

It is worth recalling that Gazprom has also expressed interest in creating its own tanker fleet with ships of ice class tonnage no less than 150 thousand ton.

However, to ensure military escorts for each carrier an entire group of ships, cruisers, frigates, corvettes, support vessels and so on is required. However, Russia lacks even these simpler ships, and the replacement of the fleet with new ships continues with microscopic steps.