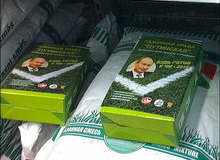 Russian entrepreneurs are known for being inventive. As soon as Russia won the 2018 World Cup bid, inventive and creative businessmen decided not to miss the perfect opportunity to make money from the good news. A new product was spotted in one of Moscow hypermarkets. The store sells lawn grass with the photo of Prime Minister Vladimir Putin printed on the packaging. On the photo, Putin offers everyone to make their lawns become football stadiums.

It is an open secret that consumers are much more prone to buying the products advertised by celebrities. If this celebrity is a world-known politician, who appeared on the cover of Time magazine, using his image for promotional purposes can bring higher profits.

The images of Russian politicians have already been used in promoting various products in Russian regions. President Dmitry Medvedev and EMERCOM head Sergey Shoygu appeared on billboards advertising construction materials and water filters. The politicians did not authorize such activities, and the Federal Antimonopoly Service showed an appropriate reaction to the illegal actions.

The story with Putin's grass started when a reporter of Ogonyok magazine blogged about a photo, which she had taken at Moscow's Mega shopping mall. The woman took picture of a pack of "Putinskaya" lawn grass with Putin's photo printed on it. The slogan on the packaging said: "Be prepared for World Cup 2018!" The logos of the Russian Football Union and the World Cup can also be seen on the pack. The pack itself is styled as a fragment of a football field.

Putin's press secretary Dmitry Peskov told the Moskovsky Komsomolets newspaper that the chairman of the Russian government did not OK the use of his photo.

Many Russian bloggers wrote that the reporter, Natalia Radulova, simply created her photo in Photoshop to attract attention to her own persona. Others said that the appearance of Putin's photo on the packaging of lawn grass was not incidental.

Prior to the voting, which took place on December 2, Putin supposedly had several meetings with FIFA officials to lobby Russia's interests. That is why many associate Russia's victory with PM Putin, rather than President Medvedev.

We contacted the store, where the lawn grass was seen to find out if Putin's grass exists in reality. Spokespeople for the store administration laughed in response to the question. They said that they had never had "Putinskaya" lawn grass in stock.

"This is some kind of a joke. I need hardly say that selling a product with Putin's photo on it is unreal. We've had many calls from people asking about it, but we do not know what to answer. There is no grass," a store manager said.