Who wages war on monuments in Russia? 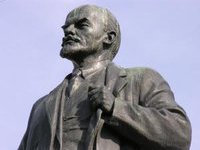 The war on monuments in Russia continues. This time, there was an attempt to blow up the monument to Lenin in the town of Pushkin (Leningrad region). The monument stood, but windows in nearby shops and homes shattered from the blast. A similar incident occurred with a monument to Lenin at the Finlandsky railway station in April of 2009. It has already been restored, but the organizers and perpetrators of the explosion are yet to be found.

The monument in the town of Pushkin was erected on November 7, 2006. Prior to this the monument to Lenin was located in the Tauride Garden, from where it was transferred to the pedestal of the monument destroyed in 2004.

These kinds of incidents occur regularly in Russia. In this case, if the perpetrators are found, they face a very strict punishment. The most famous example is the case of members of the group "Revolutionary Military Council," who in 1997 blew up a monument to Nicholas II in Moscow region and mined the notorious work of Zurab Tsereteli in Moscow, the monument to Peter the Great. Yet, the investigation into the case dragged on for several years. However, the members of the Revolutionary Military Council managed to commit not only explosions and sites mining, but other crimes, including murders.

The investigation of the explosion at the Finlandsky railway station dragged on for six months with no results. Incidentally, the governor of St. Petersburg Valentina Matvienko mentioned that case when she expressed her outrage regarding the incident in Pushkin. She noted that there are questions to law enforcement officials who fail to prevent such crimes.

Yet, this is not only about the police. The issue is much more serious. In fact, the authorities react to this kind of incidents only when they have already taken place. It is obvious, that "he who challenges a monument, challenges our history," as Valentina Matvienko put it.

However, the government challenged the monuments repeatedly, both in Soviet times and under the democracy. It is likely that this happened in pre-revolutionary times as well, but now we simply do not remember this.

Particularly "eventful" in this respect were the formative years of the new government - consequently, the 1920-1930's and 1990's. Many probably still remember the television footage showing removal of the monument to Dzerzhinsky from the pedestal in the Lubyanka Square. The new Russia did not need such monuments. However, it was quickly discovered it did not need many other things. The current incidents, unfortunately, do not cause a negative reaction in many people since they are accustomed to it.

According to the writer Alexander Prokhanov, the Russian society has a disease of blasting historical periods. "The monuments which reflect the history are petrified history; they are objects of historical impacts. And there's nothing you can do about it. All attempts to reconcile the historical era, for example, white with red, end in failure. Because at some point, when there is a synthesis or sedation, suddenly some crazy person wakes up and starts, for example, de-Stalinization. People start fighting not just with the image of Stalin, but also power station built by the Soviet people, the spacecraft created by them. And de-Stalinization or de-sovietization occur not only through the explosion of monuments, but through the explosions of all material and spiritual culture," said Alexander Prokhanov to Pravda.ru.

"We have some cold civil war that is ongoing," said, in turn, film director Karen Shakhnazarov. According to him, "the meaningless infinite anti-Soviet propaganda, too, affects the minds."

"There is not end to it. It seems that on the one hand everything calls for tolerance, on the other hand, the Soviet regime has to be kicked. And what this translates into? Considering the amount of alcohol consumed in the country, the effect on those with weak minds is clear - they take the explosives and start blasting monuments, each other, etc.,"said Karen Shakhnazarov.

Perhaps, the reason of the monuments explosion should be sought in the very "cold civil war. " Not that it is really relevant to the current Russian society, but there are attempts to make it this way. If they are successful, we cannot rule out that the struggle with the historical heritage in Russia will be of a much greater proportion.