Medvedev: Russia and Poland must clear log jams of the past 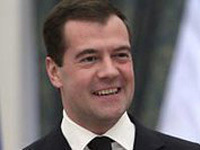 Russia's Dmitry Medvedev is visiting Warsaw on Monday, December 6, where he is going to have official meetings with his Polish counterpart Bronislaw Komorowsky and Prime Minister Donald Tusk. Prior to the visit, Medvedev gave an interview to Polish mass media, in which he spoke of the issues of bilateral relations, foreign and home politics of the Russian Federation.

Medvedev said in the interview that he did not rule out his participation in the presidential election in Russia in 2012. "I've already said before that if the situation in our country is normal and stable, if I have the adequate support of the population, I do not rule that out," the president said.

"They do not announce such things in advance, even out of superstition, not to mention political reasoning. Such things are done at the time, when it is necessary to do them. I have other colleagues, who can also participate in this political process. I believe that it is most important to preserve the succession of power and the succession of the political course. I do not exclude this work for myself - this is normal for any politician," the head of state said.

Russia Today: We should respect our history, but avoid being its captives

Medvedev answered the question about one of the most painful issues of the Russian-Polish relations - the Katyn Massacre. He said that it was not serious to try to cast doubts on Stalin's guilt in the execution of Polish prisoners of war in the USSR in 1940. "It is absolutely obvious, who committed that crime and what for. The State Duma has returned to this question yet again. Stalin and his associates are responsible for that crime. I have adequate documents which I received from the so-called special dossier," Medvedev said.

The documents, the Russian president said, are available on the Internet and can be accessed by anyone. "The attempts to cast doubts on those documents, to say that someone fabricated them - this is just not serious. This is being done by those, who try to whitewash the nature of the regime, which Stalin built in our country." Medvedev said.

Poland highly estimated the initiative of the State Duma (the parliament) of the Russian Federation to recognize the Katyn Massacre as a crime of Stalin's regime, RIA Novosti reports

"The fact that Medvedev is coming to Poland several days after State Duma approved the crucial statement condemning the Katyn crime, testifies to a serious approach of the Russian administration to this visit and to Poland," Radoslaw Sikorski, the Polish Foreign Minister said.

Russia will have to come a long way to build a law-based state, because the country is currently standing in the very beginning of the way, for which "law nihilism" is quite typical," Medvedev said.

"I don't have any illusions about the fact that we will have to walk a long way [...]. Democracies are not built during ten years. Democracy never existed in our country before 1991, when the modern Russian state appeared. I would like to stress this out - never - neither under the tsarist, nor the Soviet or any other period. This is a complicated process. This does not mean, though, that we did nothing during the recent 20 years, and especially during the recent ten years," he said.

"I am deeply certain that democracy is closely connected with economy. To have modern democracy, Russia is supposed to have strong and modernized economy, which should not be based on oil and gas only, although they are very important constituents of our economic well-being. At the same time, to create modern economy, we have to build a modern political structure, in which basic laws and rights would be guaranteed," Medvedev said.

Medvedev assured that the Russian authorities were doing everything possible to investigate the catastrophe of Lech Kaczynski's plane in Russia's Smolensk region. The tragedy has become a serious test for the Russian administration. The day, when the tragedy occurred, "will always stay in my memory," the president said.

"I believe that this cooperation has moved our relations forward. Yes, it had an absolutely mournful start, but that cooperation allowed to demonstrate good intentions of the Russian party," Medvedev said.

"As soon as it happened, I thought that we must open the situation as much as possible. The level of cooperation, to my mind, was unprecedentendly high. There are always technical nuances, which the parties can interpret differently, but we did not have any considerable discrepancies," the Russian president said.

"I will probably remember those minutes throughout my whole life. When I was informed about what happened, I could not believe that it could actually happen. It was a colossal tragedy," Medvedev said. "Our goal, the goal of the Russian Federation, was to show to our Polish colleagues that we are absolutely open to the investigation of the reasons of the tragedy. I was perfectly aware of the fact that some people would set forth most bizarre and paradoxical hypotheses," Medvedev said.

As for Russia's relations with NATO, Medvedev said that Russia does not approach the North Atlantic Alliance as a threat, Pravda.Ru reports.

"Our defense doctrine does not say that NATO is the primary threat. It says that the uncontrollable expansion of NATO may create threats to destabilize the international situation. These are absolutely different things. As for NATO's position, the strategic conception of the alliance also says that NATO does not threaten Russia. This concept was approved in Lisbon, and this is also a change of the paradigm of our relations," Medvedev said.

"Russia and NATO must come to an agreement on air defense to avoid another arms race. Air defense system must become a joint initiative for Russia and NATO to defend us against potential threats.

"Otherwise, if Russia does not find an appropriate place in this system, by 2020 we can come to a situation, when the missile shield will be considered as a factor which destabilizes nuclear balance and reduces Russia's possibilities to maintain nuclear parity as long as nuclear arms exist," Medvedev said.

"This is exactly the reason why I formulated the adequate idea of sector-based responsibility of certain states within the framework of missile defense in Europe. I am looking forward to my partners - the USA and other NATO states - to study Russia's ideas very attentively," the Russian president said.

"If we agree on missile defense, it will mark a breakthrough in our future relations. I am very hopeful about it," he added.

Medvedev reminded that the previous US administration was intended to deploy a system of interceptor missiles and radars in Poland and the Czech Republic. "In our country, this idea was perceived as an idea to weaken Russia's defense potential. At some point I had to make an unpleasant decision to deploy an additional quantity of missiles.

"The new administration shelved the previous plans, and it was a correct decision to make. I told President Obama that the things that we are building now would not be relevant for either me or him as politicians. It will be relevant for the situation that is going to occur in ten years, when the four-stage missile defense system is finally deployed by 2020," Medvedev said.