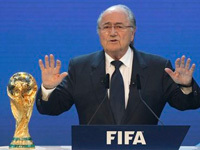 "Hurray! Victory! Now we have to really prepare the way we stage the World Cup. And, of course, put up a deserving performance," Medvedev twitted soon after the FIFA 2018 vote in Zurich was broadcast live on most Russian television channels.

For the first time in history, World Cup will be held not only in Russia, but in Eastern Europe too. Traditionally, the hosting country is exempt from the qualifying tournament, RIA Novosti reports.

The 2018 bidding process started in March 2009. Russia's Andrey Arshavin said that a World Cup in Russia would leave a "human legacy" that would last for generations.

''Russia is a huge country, the biggest on earth. Everything is extra-large, including the organization of the game, which, by the way is the No.1 sport in our country. With the support of the government, $1 billion (£638,000) will be invested into grassroots and football development by 2015, as well as into football for women, beach soccer and programs for handicapped players," he wrote on Goal.com.

''We are building pitches, football centers, schools and training sites in the most remote areas of our country, growing the game and providing opportunities for the next generations. We are training coaches and other specialists, and working hard to modernize the infrastructure of our top leagues.

''Last but not least we are building stadiums fit for the biggest competition on earth. It has been said that a huge effort is being needed. It is already underway, as can be seen in my native Saint Petersburg with the new stadium that will be finished by late 2012, or in Kazan, Sochi and elsewhere," Arshavin wrote.

Dmitry Chernyshenko, Sochi 2014 President and CEO, said that the World Cup in 2018 would give Russia an opportunity to use the legacy of the Winter Olympics in Sochi even more efficiently.

"We are delighted that Russia has been selected to host the 2018 FIFA World Cup and congratulate our partners at the Russia 2018 bid committee," Chernyshenko said.

"Following Sochi 2014's victory in 2007, the result is a further sign of the transformation taking place in modern Russia and of our enthusiasm to welcome the world to our country and the city of Sochi."

"One direct legacy from the Sochi 2014 Olympic Winter Games will be the main stadium, which will host the opening and closing ceremonies, and is now set to host matches at the 2018 FIFA World Cup."

"Indeed, the entire city is being transformed into a world class sports resort and now has another wonderful opportunity to showcase to the world its unique features including its proximity to the sea coast and snow peaks," Chernyshenko said.

FIFA President Joseph Blatter said that Russia's selection as a host of the 2018 World Cup will boost the popularity and development of soccer around the world.

"You [Russia] have held a good presentation, a very emotional presentation, you spoke from your heart, and all was clear already in the second round of the voting," Blatter told Putin during a meeting at FIFA headquarters.

"We have shown that we are ready to go to Africa, Brazil, and Russia. Eastern Europe is a huge territory where we have not been before," Blatter said.

Russia pledged to spend about $10 billion on the preparation for the World Cup and to ensure "the best conditions for players as well as for the spectators during the event," RIA Novosti reports.