Will Russia become as much Islamophobic as Europe? 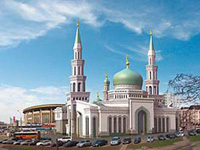 Several dozens of cars traveled along Moscow's Volgogradsky Prospekt on Sunday protesting against the construction of a mosque in one of Moscow neighborhoods. "Yes to park! No to mosque!" the slogans on the cars said.

The members of the action clearly stated that they were not Islamophobics. They said that they were against any construction per se in the are of their residence. They even protest against the construction of a new kindergarten. According to the protesters, the construction of the mosque on Volzhsky Boulevard will result in problems not only for local residents, but for all those who use the Volgograd Prospekt as their car routes. If the mosque is built, hundreds and even thousands of Muslims will be blocking the avenue every week for prayers.

As for the traffic problem, there is a problem about it indeed. There is hardly any moment when the avenue is not jammed. However, it seems not likely that the cars driven by Muslims will make the problem even bigger: there are no traffic jams near Moscow's central mosque on Olympic Prospekt.

The decision to assign the plot of land for the construction of the mosque on Volzhsky Bouleravrd was published on the website of the prefecture of Moscow's South-Eastern administrative area in July of this year. It was not an initiative of the prefecture: former mayor of Moscow Yuri Luzhkov ordered to assign a plot of land for the purpose in 2008.

However, the plans to build the mosque with the holding capacity of 3,000 people led to negative reactions from local residents. The people held several actions of protest and then wrote a letter to the president of Russia with a request to interfere into the situation.

In October, prefecture officials said that there were plans to build the mosque, but the final decision regarding its construction had not been made. It was supposed that the decision would be made after public hearings. A month later, the head of the prefecture Vladimir Zotov said that there would be no mosque built on Volzhsky Boulevard.

It is worthy of note that there are only four mosques in Moscow. Some sources say there are seven, but it does not change the situation for the better anyway. This is a very serious problem indeed. There are many Muslims living in the Russian capital. Tens of thousands of people gathered near the central mosque in Moscow downtown. The exact number of Muslims living in the city is unknown: experts say that there are from 900,000 to 2 million of them.

This is a fact, no matter if someone may like it or not. City officials are not the only people who can do something to solve the problem. One should conduct a dialogue between the leaders of religious confessions and public figures. For the time being, the challenging behavior of one group and the negative reaction to it from the other group does not build any dialogue at all.

It is more than just sad, because Russia has hundreds of years of experience of peaceful coexistence between followers of different religions. There is no such experience in France, Germany or Switzerland, which makes similar problems in those countries much more serious. That is why they pass new laws restricting the public wearing of Muslim scarves and conduct referendums against the construction of minarets. Russia has not reached that point yet. Will it happen some day?