WkiLeaks trashing Russia: Much ado about nothing 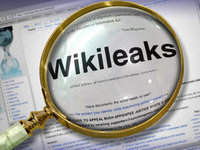 As it was promised, on Sunday night, WikiLeaks launched the publication of correspondence between American diplomats. It was said prior to the publications that the documents would subsequently trigger serious international scandals. This may happen in the future indeed. The documents are presumably about unflattering characteristics, which American diplomats attributed to prominent politicians of a number of countries, including Russia.

The materials from WikiLeaks (not all of them, of course) were republished by The New York Times, El Pais, The Guardian, Le Monde, Der Spiegel. In total, there are over 250,000 documents; the most recent one of them is dated from February 28, 2010.

As for Russia, the Russian media paid most of its attention to the following:

- Officials of the US embassy in Moscow called Russian President Dmitry Medvedev "pale and hesitant" leader who "plays Robin;"

- Chechen President Ramzan Kadyrov brought a five-kilo lump of gold as a gift to a lavish wedding in Dagestan. Kadyrov arrived for the wedding sporting a gold-plated pistol;

- Azeri President Ilkham Aliyev told US Under Secretary of State William Burns that there were all vestiges of confrontation between the teams of Putin and Medvedev, although there are no such vestiges between the president and the prime minister in person;

- There was also a thesis about Russian special servicing cooperating with criminal groups. In general, according to the disclosed documents, Russia has become a gangster state.

This is how Russia was portrayed in the new documents. The new materials can be anything but not a fruit of serious analytical work. Russian Reporter magazine claimed that it could access the new documents before they were published. According to the magazine, it seems that the US Ambassador to Russia was too trustful to his sources in spite of the fact that the sources can hardly be referred to as credible. For example, the ambassador paid attention to Communist Party deputies, who dwell upon the future of Medvedev-Putin tandem.

The ambassador also refers to the Russian "experts" that slander the ruling regime in the country on a regular basis. In addition, it seems that the US diplomat has a biased approach to the Russian leaders and tends to take the words about Medvedev's political weakness for granted.

Indeed, judging upon the exposed documents, one may think that employees of the US Embassy in Moscow spend a lot of their time reading the blogs of the Russian non-system opposition and articles written by those experts, who seem to be obsessing about contradictions in the president-prime minister tandem.

Could a "weak" president start military actions in August of 2008 when Georgia attacked Abkhazia and South Ossetia? It goes without saying that the president knew that Europe and the USA would not praise such a decision. There was an impression during the first hours after Georgia's aggression that the Russian administration would only respond with diplomatic protests and statements at the United Nations Organization. Or does that not count?

Were Ilkham Aliyev's (the President of Azerbaijan) confessions a revelation to anyone? Quite on the contrary, they are easy to understand taking into consideration various oil and gas pipelines projects. The USA and Azerbaijan are very eager to have Nabucco without spending a cent on the project. The EU is not being so enthusiastic about the project anymore because of its overwhelming cost.

As far as Kadyrov and his gold is concerned...Is this supposed to be a piece of news? It probably is for the Americans, although it most likely seems to be something exotic for them, just as it seems for the Russians. If someone is interested in taking a look at Kadyrov's gold-plated pistol, it is easy to find a video (from 2009) on one of the most popular video hosting services online.

It was also interesting to find out that US diplomats do not refer to Russian special services as "murderous KGB" - there were no such metaphors in the exposed documents, although this is not the end of the story yet.

In general, one may conclude that WikiLeaks has revealed nothing of what was promised by its source - arrested US army Private Bradley Manning, who is suspected of helping the world have a peek into sensitive US diplomatic documents. Manning posted jokes on his Facebook page saying that 'military intelligence' was an oxymoron. He was speaking about criminal conspiracies in which the fist world was exploiting the third.

Is anyone is interested in conspiracies, when US embassy officials called Russia's Medvedev "Robin?" Show business lives under its own laws.