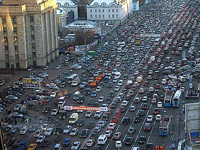 A major scandal is brewing in Moscow, where people are very unhappy with the policy of the new mayor. The ban on parking on Tverskaya Street, the major street in downtown Moscow, was only the beginning of the collapse. Now the residents will start having problems with food since prices for its transportation are to increase by 70% (due to the limitation on entry of trucks into the city).

The new mayor of Moscow Sergei Sobyanin again spoke about the mistakes of his predecessor, Yuri Luzhkov. According to him, "the Moscow transport hub has gathered all the town planning mistakes of the world." Of course, it is easy to criticize others but rather difficult not to make mistakes yourself.

Speaking about the transport issue, it is worth recalling some of the initiatives of the new mayor of Moscow. Take, for example, a ban on the movement of vehicles on the Ring Road with the capacity over 3.5 tons from 7am to 10pm. It would seem that this measure should help to overcome congestion. However, it had the opposite effect - increased transportation costs. In this case, it means increased cost of shipping for retailers, which would lead to rise in price.

"In fact, prices could start to grow as retailers need to change the logistics chain, which will increase costs and, eventually, the burden will be shifted to the buyer," an analyst of Investcafe commented.

Incidentally, the new mayor is not concerned with the fact that small businesses are experiencing devastating losses due to his order to shut down food kiosks in the city. According to the "updated" position of the mayor, he did not give orders to metropolitan officials to hastily demolish the kiosks. Instead, he instructed the Moscow Committee in writing to develop a new layout of small retail trade facilities "considering traffic situation, the needs of residents and the convenience of the location" before May 1 of 2011.

By the way, the mistake with the demolition of food kiosks has not taught the new mayor anything. Recently, he again orally ordered to take down all mobile payment terminals in the city. As it turned out, their demolition took place before the arrival of collectors, so many terminals "evacuated in an unknown direction" were filled with money.

Muscovites experienced a real shock when they learnt about a ban on parking on the Tverskaya street in central Moscow. It happened a few days after Sobyanin paid a visit there. During the first day of the ban, over three hundred cars have been towed away. Drivers occupied the adjoining streets. As a result, these streets became extremely congested. Interestingly enough, the ban did not solve the issue of traffic jams on Tverskaya Street because the main problem of this street is not the cars parked at the sides of the road, but traffic lights.

The ban on parking has affected the work of retail outlets on Tverskaya. Tverskaya Street, which appeared in Moscow in the 12th century, has always been a trade street and has kept its focus until today. However, knowing that they cannot park on Tverskaya, many shoppers have cancelled it from their route. Business owners on Tverskaya can only hope for the reversal of the decision to ban parking.

Traffic jams are, without a doubt, a frustrating phenomenon. On the other hand, the solution of the issue is not worth all the troubles that broke into the lives of Muscovites after the manifestation of the new government. Most Muscovites spend about an hour commuting, both driving and riding public transit.

Another question is why Sergei Sobyanin is so quick to make decisions? Would it be prudent to consult with experts first, before giving oral instructions in the course of conversation, cleaning purses of Muscovites and ruining businesses?

Was Luzhkov a thief? Perhaps. Did his wife become rich at the expense of Muscovites? It is quite likely. But certainly something looks painfully familiar in the way the new mayor's wife Irina owns a road construction firm, and the fact that 100 billion rubles were allocated for road construction in Moscow.