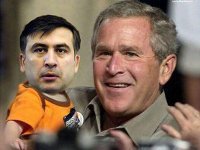 Hollywood is reportedly preparing an ideological operation against Russia. The goodie of the new "epic movie" is going to be Georgia's sitting President Mikhail Saakashvili. The making of new Russophobic lampoons has become possible because of Russia's ideological inactivity. If the situation is not going to change for the better, this "artifact" may become another victory of Mishiko the Fearless.

Any country and its people may face a variety of dangers throughout its existence: natural disasters, epidemics, riots and so on and so forth. War can be one of them. A war against a whole country can be waged not only militarily, but also peacefully. An attack conducted with the use of weapons of ideological destruction, or a political attack, can cause as much damage as common bombings.

Russia has always been lucky when it comes to the number of ideological adversaries. She has been lucky at it at all times and all eras. Now the country will have to deal with another anti-Russian ideological operation. Online publications report that Hollywood is currently working on a movie titled "Five Days in August". The movie is being made on the order from Georgian producers. The main characters in the new film are: aggressive Russia, heroic Georgian President Mikhail Saakashvili and the helpless Georgian people who suffer from the attacks of Russian planes, helicopters and Kalashnikovs.

It seems that it was not the Georgian producers, who ordered the film of lies and slander. Most likely, it was vice versa: Hollywood followed orders from adequate special services to push Georgian producers towards ordering the film. It's not much big of a deal, though: it is neither fighters for truth nor respectable movie makers who work on this piece of lies.

Why do they need to have another ideological nonsense about Russia? There is no simple answer to this question. One question prompts several answers.

First of all, the West needs to improve the authority of Mr. Saakashvili. The Georgians may eventually become very disappointed in their reckless president. The viewers either know nothing about him, or they have forgotten how Mikhail Saakashvili was hiding from the imaginary Russian air raid or how he was chewing his tie in front of TV cameras.

Second of all, the USA and the whole "civilized West" are very concerned about Russia's positive activities on the international arena. A way to restrict her independence in international affairs is to portray Russia as a state that is always guilty and that always tries to justify its wrong-doings."

The fabricated version of the real events of August 2008 is exhausted. The war has been forgotten. Why not stirring up the lies again? Many people tend to trust their eyes rather than their mind.

So, in March of 2011, millions of cinema-goers will have a chance to experience the horror of Russia's "large-scale, brutal and mean" attack against the "small, noble and peaceful" Georgia.

Most likely, Russia will begin to expose the lies in the film. However, as we say in Russia "a first word matters a lot more than a second." Many will perceive Russia's reaction to the film as a series of awkward excuses.

Ideological operations bring material results in combination with political profit. Needless to say that investors will not turn their heads to an aggressive country.

There is another question. Why do anti-Russian forces attack our country so easily and delightfully? There are three answers to it.

First. Russian politicians fatally underestimate the significance of ideology in the modern world. They tend to think that the truth will find its way to the masses itself. Russia has heard too many Western tales about the life of Soviet people dominated by Soviet ideology. As a result, Russia has virtually declined ideology. The West hasn't. Now we have Russia ideologically disarmed, whereas the West is armed ideologically very well. The West uses this weapon of spiritual destruction - ideology - on a regular basis. Russian politicians have something to think about here.

Second. Many years of experience confirmed: the authors of the movie will not carry any responsibility for any fiction about Russia. They can be sure that their product will entail no action on Russia's part.

Third answer. Political adventurers of the whole world know that Russia may take inconsistent actions in response to vile insinuations from other countries. Russia said many times to the whole world that it would defeat any aggressor. As for slanderers - personified or corporate - Russia said that it would use toughest diplomatic, political and economic sanctions against them.

The attack conducted by Georgian troops against Russian peacemakers and Georgia's aggression against South Ossetia should have ended with complete destruction of the Georgian army, the storm of Tbilisi and a severe sentence for Mikhail Saakashvili.

If that had happened, would the international community have been concerned too much? It does it all the time anyway. It is not ruled out that the international community would have understood Russia's toughest measures against the aggressor a lot better than Russia's minimum punishment for Georgia. The truth about five days in August would have probably reached the West if the aggressor had been defeated, rather than forced to peace.
What if Georgia's supporters would have provided military help to the country? The West provided that help anyway as it shipped military hardware and instructors to Georgia. That was all the West could do - they had to deal with more important things in Iraq and Afghanistan.

Does this all sound too radical? This is politics. Politics is communication, as Aristotle said. There are two special points, where politics disappears: complete agreement and complete inability to cooperate (war). If there is complete content, there is no point of communication. If it is impossible to communicate, people develop hostilities to each other.

Politics exists between these two extreme points. Saakashvili took communication with South Ossetia and Abkhazia to the point of war. War has its own laws. A war ends when one of the parties is destroyed, and the winner obtains the right to handle the way of the defeated enemy.

Half-measures only suspend a war - they do not cancel it for good. Incomplete wars continue in other forms - most likely in the form of ideological attacks against the winner. Aggressors must be destroyed to their capitulation.

It should be as clear as day to all politicians harboring aggressive plans. The nations (armies, first and foremost) should know it. If they unleash a war against another country, they must be prepared to lose everything: life, freedom, honor and well-being.

Half-measures build grounds for various speculations, and this is what Russia reaps right now because Russia has not punished the aggressor (Georgia) accordingly.

There is another aspect to this story. There is evil, ambitious and stupid Saakashbili, but there are also the people of Georgia, with whom Russia has been friendly for many years. They say that every nation has the rulers that it deserves, but I do not think that it is true. I'm talking about friendship, about the truth of life.

If Hollywood releases the above-mentioned film, Russia should entirely and completely boycott that "work of art."