No one wants to work at Russian police 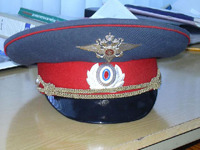 On the eve of Police Day, or, to be more precise, Militia Day, since the police in Russia are  referred to as  'militia', All-Russian Center for Public Opinion Studies (VTsIOM) released data from a survey of popular professions among the Russians. It turned out that Russians consider the prestige of working at internal  affairs agencies to be extremely low. In terms of income this profession was the fifth on the list.

In terms of the level of prestige militia was ahead of military and teachers, gaining 3.06 points out of possible 5. Interestingly enough, teachers were ranked even lower (2.83).

Militia was ranked by Russians as the most non-prestigious (3.06 points out of possible 5), and military were very close (3.09).

Possibly, a holiday called Militia Day is celebrated in Russia for the last time. Starting next year, this service will be renamed "police."

The second place was taken by insurance agents. Analysts attribute this to the fact that the insurance market is under pressure from the crisis.

Interestingly enough, the list now includes engineers and installers in the field of communication. These specialists are on the third place in this ranking. Telemarketers are also not in demand, although in general sales people are still in high demand in the labor market. The demand for HR managers and recruiters is also low, Bigness.ru reports.

The sixth line of the ranking was taken by lawyers. As experts explain, this is due to the fact that in recent years, Russian universities produced too many specialists in this field. As a result, many law graduates cannot find a job in this area.

Graphic designers are number seven on this list due to overabundance of specialists.