Rusisa goes back to Afghanistan for NATO? 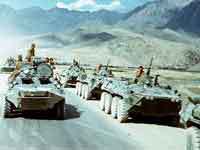 Western publications, particularly The Guardian, say that Russia can become a participant of the military campaign in Afghanistan. The country may receive such an offer at the upcoming NATO summit in November, where Russian President Dmityr Medvedev is expected to participate.

It goes about the participation of Russian specialists in the training of Afghan pilots and NATO's cooperation with Russia on the border defense, arranging supplies to Afghan troops and the struggle against drug trafficking.

As for the supplies, it was said that Russian helicopters would suit the actions in Afghanistan better than NATO choppers. This aspect of cooperation can be considered a solved matter because, as British media outlets report, the agreement about the delivery of 21 Russian Mi-17 transport helicopters to Afghanistan had been reached in the summer of 2010.

The deployment of Russian troops in Afghanistan is not a matter for discussion, at least for the time being, according to Western journalists. One should bear in mind the fact that Afghanistan used to be a hotspot of the cold war from 1979 to 1988 because the West actively supported the Afghan opposition in its struggle against the Soviet troops.

Times have changed. The current war in Afghanistan continues for ten years already, and it seems that it is not going to end. NATO troops entered the country in 2001 in response to September 11 attacks, although no one could prove the fact that the Afghans took a direct participation in the terrorist attacks against America.

What if Russia accepts NATO offer and becomes involved in the Afghan war? Pravda.Ru asked the opinion of Igor Rodionov, the commander of Soviet troops in Afghanistan in 1985-1986 about such a perspective.

"This is exactly what is going to happen. What do helicopter deliveries mean? It means that Russian pilots and technical personnel will have to go to Afghanistan too. Then it turns out that it is impossible to have the locals involved in protecting the Russian crews, and more Russian servicemen will be required in the country. It's a chain reaction, where one action inevitably leads to another.

The Afghan government was whining all the time asking for help, and the USSR eventually decided to help them - this is how the Soviet troops found themselves in Afghanistan in 1979. The Soviet 120,000-strong army became involved in the war in a blink of an eye. If we dance to NATO's tune now, we will find ourselves right in the middle of the American mess in Afghanistan. People learn from other people's mistakes. At the end of the 1970s, we ignored the lessons, which the Americans had learned in Vietnam. Now that we have our own lesson of Afghanistan, are we ready to walk twice into the same water?"

"Do you think that it was the Americans who lured the USSR into the Afghan trap?"

"It is quite possible. The Soviet troops entered Afghanistan because it was said that the Americans were going to land there. Most likely, it was a very well-plotted action to have the Soviets involved. Afterwards, when we started drowning in the Afghan swamp, the West presented the USSR as an aggressor, and the Soviet Union found itself in international isolation. Even our Warsaw Pact allies preferred to keep silence and then they took NATO's side as soon as they had an opportunity.

"In Afghanistan, we had to struggle against the things that the West was doing against us. Mujahedeens had Western weapons to kill Russian soldiers. I perfectly remember piles of captured weapons that had arrived to Afghanistan from Western countries. Now the Americans want us to join them to kill the Afghans!"

"Which goals is NATO pursuing in Afghanistan now?"

"The West did not stop on the collapse of the USSR, it is determined to do the same with Russia. We've always been an enemy for the West, and it still sees Russia as an enemy. Now the West is being too busy with other affairs, such as the wars in Iraq and Afghanistan, but our turn will come some day.

"England has always been acting like this. That is why we got involved in World War I, which was basically a global clash between Britain and Germany. During World War II, the West was patiently waiting for Nazism and Communism to become exhausted to feast on the fruits of our victory. Afterwards, they blamed Stalin for everything and made him a scapegoat. They have already tried to have Russia involved in the war in Iraq, but thank God Russia refused."

"Some people say that the war against the Taliban is only an excuse to the West to get settled in Afghanistan. Why does NATO need this?"

"It's a fashion trend now in the West to talk about the horrors of Stalin rule and collectivization. But the things that the USA and their Western allies on the planet are doing now, is collectivization in global scale. The West needs to settle in Afghanistan to build a circle of army bases around China. This powerful and rapidly growing country is like a toothache for the West now. A clash will occur sooner or later, and NATO needs to be prepared for it. Now the West wants to find some fools who would pull their chestnuts out of the fire for them - Russia that is. In my opinion, Russia's participation in the Afghan war is out of the question! It's their problem that they have to handle, not us."

"Let's just imagine that Russian soldiers will step on the Afghan territory again. How will the locals greet them?"

"It's not going to be a welcome. In Afghanistan, they still remember very well what the Soviets did there. We were not just planting trees there, as the Soviet TV was saying, we were waging war, we were killing people. As a result, we made a half of the nation stand up against us. It was a consequence of our actions.

"Islands of resistance began to appear one after another here and there. We committed terrible crimes there with our carpet bombings and volley-fire attacks. We were waging war against the people, who cursed us - they will never forget what we did. For Afghans, the Taliban is national resistance to foreign invasion. Why do so many Afghans support the Taliban? Because they have been dreaming about one thing only for 30 years: 'Leave us alone! Let us live!" But they won't let them. At first it was the USSR, now it is NATO."

"But we don't want to bomb Afghan villages now, do we?"

"It all starts with just one visit. Many wars start with something positive, with a wish to defend oneself and so forth. But, as they say, the road to hell is paved with good intentions."

"What memories do you have of the Afghan war?"

"It's all about hopelessness. It was a war that left so many unjustifiable victims. What were those young guys fighting for and what did they die there for? Did they die for a bunch of Afghan intellectuals who thought of themselves as the Afghan nation?"

"What influence did the Afghan war have on the USSR and what may happen if we repeat the mistakes of the past?"

"The Afghan war played an important role in the destruction of the Soviet economy. When I was staying in Afghanistan, we had serious food problems at home in the Soviet Union. If only you could see piles of food rotting under the scorching Afghan sun - thousands and thousands of tons of rotting canned food! Each day of that war cost a fortune, and that money could be used for improving the economic situation in the country. The Afghan war contributed greatly to the collapse of the Soviet Union."

"Don't you think that it is strange that such a suggestion was voiced at the time when some NATO members, such as Holland and Canada, are going to pull out their troops from Afghanistan?

"The USA can see, of course, that the number of its allies is going down, and the Americans want to play safe at our expense. Apparently, they want to have an escape route in case they eventually decide to withdraw the troops from the country, and they would like to have Russia as a defeated party which would be forced to face the aftermath of all that. But the Talibs will not settle down anyway. How would they be able to live knowing that the enemy, who took part in the destruction of the Afghan nation together with the USA is so near, in Tajikistan and Kyrgyzstan? If we do not take any part in this and start to establish ties with the future government of Afghanistan, we will have an opportunity to achieve peaceful coexistence."