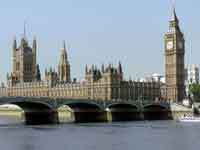 Former mayor of Moscow, Yuri Luzhkov, has reportedly filed documents for his departure to Great Britain. Many Russian media outlets immediately presumed that Mr. Luzhkov was going to emigrate from Russia. Russian notorious oligarch Boris Berezovsky, who has been living in Britain for years, added more fuel to the fire when he stated that he would be ready to help Luzhkov seek political shelter in the country which traditionally welcomes politicians and entrepreneurs persecuted in Russia.

According to Life News, the former mayor filed documents for a visa at the British embassy in Moscow. Like everyone else, Luzhkov had to wait in the line at the embassy, fill in the questionnaire and even had his fingerprints taken. The Guardian and then other Western publications wrote that the former mayor of Moscow was supposedly going to move to London to start a new life there.

If so, Luzhkov is definitely not going to London to just enjoy the views of the Thames. His wife, Yelena Baturina, one of Europe's wealthiest women, owns real estate in the British capital.

Last year, for example, the British press paid attention to Baturina's purchase of the largest mansion in London. There is no official confirmation to the story, but many Londoners started referring to the building as the mansion of a Russian billionaire.

It is worthy of note that Britain has turned into a conservation for those who avoid Russian justice. For example, Russia currently insists on the extradition of 20 Russian citizens living in London. The list includes entrepreneur Boris Berezovsky, emissary of Chechen terrorists Akhmed Zakayev and businessman Yevgeny Chichvarkin.

Boris Berezovsky, a notorious "refugee" from Russia, charged with fraud and money laundering stated that he was ready to meet the former mayor of Moscow and even provide financial assistance to him and his wife. If Luzhkov and his wife need money to pay lawyers for political shelter, Berezovsky would be willing to help. The businessman stressed out during his interview with Interfax that his possible assistance did not stipulate cooperation with the former mayor.

It is not the first time when the media send Yuri Luzhkov out of Russia. Journalists predicted his departure from the country before and after his resignation. It was reported that Luzhkov and Baturina would most likely choose either Austria or England as their new homelands.

These rumors do not have any grounds at all. First of all, Luzhkov repeatedly stated himself that he was not going to emigrate. His close friends also said that Luzhkov was a patriot of Russia who had no plans to change his country of residence.

More importantly, Luzhkov can hardly receive a warm welcome in Britain. His long-time adversary, Alexander Lebedev, the owner of several British newspapers, asked authorities to conduct investigation of Luzhkov's and Baturina's corruptive activities. Lebedev's request was based on the information presented to the Supreme Royal Court in London by developer Shalva Chigirinsky. The man complained to the court that Mrs. Baturina had made him register 50 percent of shares of his enterprise to her name. Otherwise, Chigirinsky said, he wouldn't have had the right to do business in Moscow.

In addition, Shalva Chigirinsky said that he had to pay Baturina's bills of $12 million including the bill to maintain her private jet. Alexander Lebedev also claimed the possession of documented evidence to prove Luzhkov's abuse of power committed with a view to assist his wife's businesses.

Lebedev's investigation is not the hardest obstacle that Luzhkov would have to overcome in Britain. The former mayor may face serious problems in London because of his aversion to homosexual individuals. Activist of the Moscow gay community took a number of attempts to conduct a gay pride parade in the Russian capital, but all those marches ended with violence used against them.

It is worthy of note that London mayor Boris Johnson is not just a supporter of homosexual love - he is an active member of gay pride parades in the British capital. Therefore, British nationality is most likely not something that Mr. Luzhkov may obtain in the foreseeable future.