Where is the truth about Nord Ost hostage crisis? 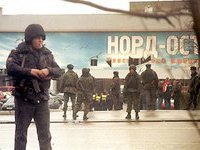 In 2002, on October 23rd, terrorists took 912 people hostage in the Moscow music theater during Nord Ost musical. The hostages were released on October 26th, but 130 people died during the siege. Eight years later, there is still no answer to the question of whether it was possible to save all hostages and whether it was correct for special services to use sleeping gas during the storm of the building.

Time heals. The horrific events, which shocked the whole country and the world, do not seem to be as disturbing as they used to be in 2002, no matter how outrageous it may sound. The hostage crisis in Beslan and the recent explosions in the Moscow metro in March of this year overshadowed the tragedy of Nord Ost.

The only people, who cannot forget those days, are the former hostages and the relatives of those, who could not escape from the hell of the music theater.

They still try to find out the truth about what happened eight years ago, they want to know what killed their loved ones. Was it really the sleeping gas that special forces used not to let the terrorists blow up their bombs?

The family of the Karpovs - Tatiana and Sergey - initiated the establishment of the regional public organization for protection of victims of the Nord Ost tragedy. The family couple lost their son, Alexander, during the terrorist act.

"You don't even imagine how many people became disabled individuals after they had to inhale the toxic gas. Practically all former hostages suffer from brain-related diseases. They suffer from poor blood circulation, respiratory problems, 12 people lost the sense of hearing. Many former hostages are diagnosed with memory loss. A person can go to a grocery store and buy there a kilo of salt three times. Practically all of them suffer from serious kidney ailments, liver and intestinal diseases. Many hostages were discharged from hospitals in two or four days, and nearly all of them were hospitalized again afterwards," Tatiana and Sergey Karpov said in an interview with Moskovsky Komsomolets newspaper.

A participant of the special operation, an officer of internal security troops, Igor Soldatov, told Pravda.Ru that the use of sleeping gas was the only option to prevent the terrorists from exploding the bombs.

"Does that mean that so many people died because of gas poisoning?"

"No, not because of the poisoning. The people fell asleep for a while, many of them woke up and left the building afterwards. It was enough to slap others on the cheeks to wake them up. If the gas had been that toxic, I wouldn't have entered the hall without a gas mask. Those who died, most likely had heart problems. Unfortunately, it was impossible to have everyone unharmed. The most important thing was to neutralize the bombers," the officer said.

"I believe that we have done everything that we could do, it was a top level operation. We could repeat that again in Beslan, but the media did not let it happen. Soon after the Nord Ost terrorist act, many newspapers published the plan of the music theater and described the special operation in detail. They wrote about the gas too, of course. When terrorists were preparing the attack in Beslan, they had gas masks, and they did not hold the blast buttons in their hands, which made our Nord Ost operation useless in Beslan. They should have kept everything secret after the hostage crisis in Moscow, but it didn't happen - that's why there were so many victims in Beslan," Soldatov said.

Former hostages and relatives of the killed decided to file a lawsuit at the European Court of Human Rights in Strasbourg. The plaintiffs claimed that the Russian authorities violated articles 2, 6 and 13 of the European Convention of Human Rights in the course of the investigation of the terrorist act. The articles guarantee the right for life, fair court proceedings and efficient legal mechanisms. The court has received 12 kilograms of Nord Ost materials.

Reasd the original in Russian