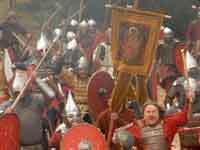 The 458th anniversary of the occupation of the city of Kazan by Ivan the Terrible's troops was marked with the discussion of the following question: "Was there the Tatar-Mongol Yoke in Russia?" The question was raised during the video conference between Kazan (Tatarstan) and Kiev (Ukraine). The conference was organized by RIA Novosti, Russia's news agency and Tatar-Inform, the republican agency of Tatarstan.

Ukrainian nationalist Vladimir Belinsky and scientist of politics Konstantin Matviyenko discussed the issue with specialists of the Institute of History of Tatarstan. The "experts," suggested rehabilitation for Mongolian emperor Genghis Khan. They also claimed that the Tatar yoke was invented to justify Russia's backwardness and the conquests of Kazan khanate, just like Alexander Nevsky, Dmitry Donskoy and the founding of Moscow in 1147, was all made up. In addition, they claimed that it was Baty-Khan's conquest of Russia that triggered the establishment of state structure in the country. What is more, Tatar specialists believe that the Russian Orthodox Church appeared in Russia owing to the Golden Horde.

The participants of the conference agreed that the Russian empire was evil that many nations in the world had already destroyed. Other nations, including Russia per se, will have to walk that path in the future, they believe.

One could simply disregard such an "expert" point of view on history. However, the remarks from the citizens of Tatarstan - a republic of the Russian Federation - seem to be inappropriate.

Sergey Mikheyev, the chairman of the department for the CIS of the Center for Political Technologies, believes that one should treat such attacks very seriously.

"This is another case of the revision of history. I do not understand why Russia does not show tough reactions to attempts to revise our own history inside Russia at the time when we vehemently reject any revision of WWII history. The Tatar yoke is not a fantasy of the Soviet propaganda. This is an old theory based on a vast quantity of facts, on numerous chronicles, many of which are not Russian.

"As for the attempts of the Tatar and Ukrainian pseudo-scientists and nationalists to cast the theory into question, it is easy to understand the roots of the problem. Unfortunately, it was our own authorities and intellectual pseudo-elite that started the destruction of the base of the Russian state structure during the 1990s.

"They need to revise history to change the identification of the population, because there is no nation without history. This is what they do, but the Russian authorities prefer to turn a blind eye on the problem under the guise of pseudo-tolerance," the specialist said.