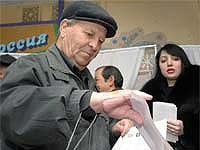 Russia had a single voting day on October 10: over 7,900 various elections with over 100,000 candidates participating took place in 77 Russian regions. This is the largest election campaign since the presidential election in the country in March of 2008.

Voters took to the polls to elect deputies of local parliaments, city mayors and deputies of municipal assemblies. In general, the elections embraced a third of Russian voters - more than 30 million people.
A member of the Central Electoral Committee, Nikolay Konkin, told Pravda.Ru that the single voting day of October 10 became the fifth one after the presidential election in March of 2008. The scale of the most recent elections was the largest: over 100,000 candidates took part in the vote, the official added.

"We used new technology in the elections - for example, ballot registration and electronic voting systems were used in more than 20 entities of the Russian Federation. The voting process was broadcast on the Internet with the help of web cameras installed at election stations. GLONASS global navigation system was used at several territories to control the movement of transport, the transportation of ballots and voting protocols," Konkin added.

Neither the Central Electoral Committee, nor observers reported serious violations in the voting process. The committee received 76 complaints during the day of voting, but none of them is going to show a serious influence on the outcome of the vote.

Spokespeople for Civil Control association also told Pravda.Ru that the elections had been arranged and conducted very well. The members of the association were observing the election process in the region.

The most serious incident during the single voting day took place in the Republic of Dagestan, in the town of Khajalmakhi, where people were electing the head of the settlement. The sitting head of the village, Abdulmuslim Nurmagomedov, was killed there in a massive fight. It was later reported that more than 4,500 ballots were stolen, but the thieves were arrested.

Abdulmuslim Nurmagomedov was not running for the position of the head of the above-mentioned settlement; the fight took place outside the premises of the election committee.

Vladimir Churov, the chairman of the Central Electoral Committee, said that there were 1,090 campaigns held in Dagestan on October 10. "I can say that the contrast with the single voting day of October 2009 is immense," the official stated pointing out the progress of the election process in Dagestan.

Just Russia opposition party conducted an illegal act as it published the results of exit polls on its official website at 3:00 Moscow time during the day of the voting. If the information had been published after the election, nobody would have had any objections about it. However, it seems that the party members could not wait for the election day to end.

Igor Borisov, a member of the Central Electoral Committee, said in an interview with Politonline.ru that the above-mentioned violation of the election law by Just Russia would be investigated from all legal aspects. He stated that specialists would have to investigate how the publication of the results of the exit polls affected the electors.

As for the exit polls, their results testified to the leadership of United Russia across the nation.