The West enjoys the fight between Russia and Belarus 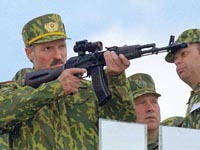 The relations between Russia and Belarus have worsened again. The official statement from the State Duma of the Russian Federation released on October 6 said: "State Duma deputies are certain that political interests that have been dominating the pre-election campaign in the Republic of Belarus must not undermine strategic allied ties between our countries."

Foreign experts believe that Russia and Belarus have been waging informational war with each other recently. Russian TV channels aired a series of "Godfather" documentaries about Belarusian President Alexander Lukashenko, portraying him in worst light possible.

The Belarusian leader did not sit on his hands after the flicks and fired back saying that the Russian administration was running "crack-brained" policies. Russia's Dmitry Medvedev responded saying that it would be better for Lukashenko to investigate the disappearance of people in his country instead of aggravating the relations with Russia. The Russian president also said that the "economic miracle" in Belarus became possible owing to Russia's agreement to deliver energy carriers to the country on privileged terms.

The press secretary of the Russian president, Natalia Timakova, later said that the relations between Moscow and Minsk had reached a dead end and would not be the same as they were before.
One of the reasons that has led to the crisis in relations between the two brotherly nations is the fact that Alexander Lukashenko runs independent politics. He particularly strongly refuses to recognize the independence of Abkhazia and South Ossetia.

The ties have worsened against the background of the pre-election campaign in Belarus. What is going to happen next? He will have to live on under the conditions of ruined relations with Russia.

Pravda.Ru interviewed Sergey Mikheyev, the chairman of the department for the CIS of the Center for Political Technologies, about the current relations between Russia and Belarus.

"Do you think that we can shelve the idea of the Unified State between Russia and Belarus?"

"It's not on the agenda now. It is quite possible, though, that Belarus will reject the previous agreements within the scope of the Customs Union, the European and Asian Economic Cooperation, etc. As for reasons, the Kremlin showed Lukashneko that he would no longer be the leader in case of unification. That is why Lukashenko forgot about the political constituent of the project but he still tried to gain economic profits from it."

"Does it mean that Lukashenko is the one to blame?"

"Both sides are. As for Russia, we play into the hands of the West with our attempts to discredit him either politically or economically. It would definitely be good for the West if Russia clamped down on "Europe's last dictator." At the same time, Western emissaries in Minsk whisper Lukashenko in the ear: "Stand up against Russia's aggression, we will help you." Now the game is being played by the rules of the West. The West follows the "divide and conquer" principle in its actions towards Moscow and Minsk. The West does not want the two countries to unite. As experience shows, they have been doing it successfully.

"Many people say that it is about time Belarus should have someone else as president. How realistic can that be?"

"Someone in the Russian establishment do have such thoughts. Indeed, it is hard to deal with Lukashenko, he violated certain agreements with the Kremlin, but it is impossible to replace him with someone else who would be loyal to Moscow. The things is - all presidential candidates, save for Lukashenko himself, support the West.

"Let's just imagine that Lukashenko leaves. What's next? A Belarusian version of Yushchenko? There are even more radical individuals among the candidates. All of them share anti-Russian views. Of course, one could invite them for a temporal alliance against Lukashenko, but it would not bring any good. It could possibly bring a year or two of more or less good relations, but then they would inevitably be ruined. There is no use to join forces with Washington either: the US administration can only offer us that "reset" button, which is nothing but a bubble."

"Who is going to win the elections in Belarus?"

"I am 100 percent sure that Lukashenko will. They keep on saying that the Belarusian economy is falling apart, but it's only a myth. If we compare statistics data we will see that an average Belarusian lives better than the average Russian. The majority of the Belarusians support their president. There is no other serious candidacy for this position."