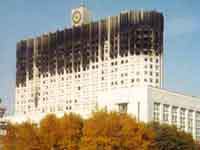 On October 3 and 4 Russia remembered the tragic events of the fall of 1993. Mourning rallies and marches in many cities of Russia commemorated the perished defenders of the Supreme Council. In the capital alone, the ceremonies were attended by nearly a thousand people. Was there an alternative to the armed confrontation between the supporters of Boris Yeltsin and the defenders of the legitimately elected Parliament? Was it possible to avoid the tragic outcome? Ruslan Khasbulatov, the chairman of the Supreme Council, discussed it in an interview with Pravda.ru.

17 years ago, on October 4 of 1993, the country, according to the current estimates, was able to avoid a civil war. However, what was the price? According to the official data, during the confrontation between the supporters of the first Russian President Boris Yeltsin and the Supreme Council headed by Ruslan Khasbulatov, 200 people were killed. According to unofficial data, there were many times more victims. For the first time in the history of Russian parliamentary, legally elected legislature was shot. A system of Russian democracy came to an end.

The parliament, elected for five years as the highest organ of the state power of Russia that consisted of 252 deputies, had a relatively short life span - only three years. On March 4, 1990 it was elected, and already on September 21, 1993, the first President Boris Yeltsin signed a decree on its dissolution, committing essentially a coup d'etat.

The conflict between two branches of government - the president and the Supreme Council -lasted through the entire year of 1993. The stumbling block was the new Yeltsin's constitution that gave the president enormous powers and negated the rights of the Parliament. According to the President-the reformer, the Supreme Council, who had the right to reject presidential laws, inhibited democratic reform in the country. In turn, Yeltsin's opponents believed that the policy of the president and the government lead the country towards a disaster.

On September 21, 1993, Yeltsin, tired of fighting with the deputies, resorted to extreme measures. He signed a decree on the termination of the Supreme Council. The deputies, who declared Yeltsin an outlaw, refused to obey the decree and continued to work. That later evolved into a full-scale armed conflict that ended with, perhaps, the most shameful moment in the post-Soviet history of Russia.

On October 4, Yeltsin ordered to storm the White House. In the morning, the parliament building came under fire from the tanks and was "cleaned" from the defenders of democracy. Ruslan Khasbulatov who was leading them was arrested.

Pravda.ru talked with Ruslan Khasbulatov, who then headed the Supreme Council, about the events of October of 1993.

Ruslan Imranovich, now, 17 years later, how do you assess the events of October of 1993?

"Imagine, that you are arrested, shot, thrown in jail, fired, kicked out of the government. What would you think then and now, 17 years later? Yeltsin, having shot the parliament, has committed a terrible atrocity. By the way, a group of deputies is preparing a letter to the European Court of Human Rights to recognize this crime against humanity.

How else can you assess it? Now Yeltsin's supporters say that they did not want to shoot. Where, then, was the order of "Stop, do not shoot?" After firing at us almost for half a day ... These bastards are lying, and you, journalists, listen with your mouths open. Well, let's suppose, the shooting was an accident. Then give an order, stop the shooting and punish those who fired. How else can you assess it? This is the greatest crime that was committed against the constitutional order. This is a public and political upheaval. Yeltsin is the culprit. He and his entourage should have been put in jail."

There is an opinion that the country managed to avoid a civil war. In your opinion, was there an alternative between a civil war and the execution of the legitimately elected Parliament?

"What does a civil war have to do with it? The civil war was led by Yeltsin himself with Gaidar and Chubais. They began carrying out their stupid economic reforms that set back the living standards in the country. These reforms have caused a universal outrage. And this outrage they tried to throw at the Supreme Council. Began shooting at it. They have created an environment of a civil war. What does the Supreme Council have to do with this? How did they manage to avoid a civil war, if one year later a civil war began in Chechnya? They're criminals!"

History, of course, does not know anything about "if" clauses, but in your opinion, could there have been another, less tragic, scenario?

"Well, of course, there could have been. After all, the main issue was the model of economic policy. I said that neo-liberal monetary model was not suitable, it led to trouble. Since then, it's been 17 years and the entire world has recognized that I was right. Now America and Europe abandon this model. Everyone is cursing the neo-liberal monetarists. But I, as a professional economist who have been dealing with western economies for my entire life, have seen it right away. If we have won then, today Russia would have been a prosperous country. In this sense, of course, there was an alternative ...
And they, who have stolen millions, of course, managed to avoid a civil war, but in fact, the people could not avoid it. They forced the situation of a civil war on the people, and we still are reaping the fruits."

Tell me, could an armed conflict and the execution of the White House have been avoided?

"Of course. If these scoundrels have not led people to Ostankino, with absolute certainty, we would have won without firing a shot. We would have put all these villains in prison, would have chosen a normal president. Would have reduced his "imperial" powers and we would have a parliamentary republic."

"My assessment: zero. This is nonsense. On the contrary it is known that Zyuganov urged his supporters to disperse and do not go out".