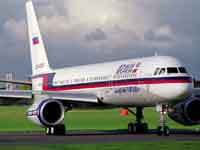 The government of Syria considers an opportunity to purchase six Tu-204 planes from Russia for Syrian Air airline, because the US government refuses to withdraw economic sanctions from Damascus, RIA Novosti reports.

The USA imposed embargo on the export of Boeing and Airbus airplanes to Syria. The nation originally intended to sign the purchase, rent and leasing contract with EADS (France-Germany) for 54 airplanes before 2028, including the delivery of eight aircraft in 2009.

"Buying aircraft is not as simple as buying a kilo of bread. It needs time," Yarub Badr, Syria's Transport Minister said. "We recently asked the Russian side to assign a single entity to negotiate the sale with Syrianair. The talks have to be direct, with no middle men or commissions," he added.

There are still serious political discrepancies between the sitting governments of the United States and Syria. Barack Obama extended the regime of sanctions which stipulated the ban on the export of all goods to Syria, except for food and medications.

Paris, among other European countries, supports the sale of aircraft to Syria, but Airbus requires the export license for the delivery of its products to Damascus because some parts of European planes are made in the USA.