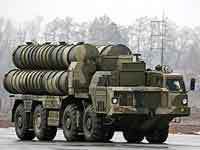 Iran will file a claim in the court against Russia if it does not fulfill the contract for the supply of anti-aircraft missile system S-300. Moscow has been warned by the head of Iran's parliamentary committee on National Security and Foreign Policy Alaeddin Borondzherdi. The contract for the supply to the Islamic Republic of five battalions of S-300PMU-1 in the amount of $800 million was signed back at the end of 2007.

However, Russia has now acknowledged that this contract cannot be executed because of UN sanctions imposed on Iran on June 9, 2010. What can Russia expect for failure of this contract? According to the existing practice, the party at fault is to pay 10 percent of the transaction value to the customer. In this case, the maximum that Russia could lose is $80 million.

The amount is clearly small. Besides, its receipt is questionable. As stated on September 27 by Russian Foreign Minister Sergei Lavrov, this contract is subject to the sanctions imposed on Tehran by the UN Security Council in June. In his opinion, this is the case of force majeure, as specified in such contracts.

However, in the long term, supply disruption could lead to the loss of the important Iranian market by Russia, which may be taken over by foreign competitors like China. Ivan Konovalov, a military expert, drew the attention to this fact in an interview with Pravda.Ru.

"In this case, it is a refusal to supply defensive weapons to Tehran, which, as many believe, is not subject to UN sanctions. Possible losses from failure of the contract with Iran, even according to the official figures, amount to 800 million dollars a year, representing 10 percent of current revenues from the sale of Russian arms.

However, the fact that Russia has refused to supply weapons can be largely blamed on the Iranian leadership, which has repeatedly voiced provocative statements on this topic. We cannot rule out that the purpose of such statements was to embroil Russia with other countries, including the West."

However, Tehran believes that Russia is to blame. Refusing to perform the contract, Russia has undermined the confidence of the Islamic Republic. This was stated by Iranian Defense Minister Ahmad Vahidi. According to the Iranian minister, such decision of Moscow indicates that Russia cannot be independent in solving simple problems. "This is a great shame for them (Russia). Thus, they showed that they cannot be independent in solving one simple problem. Their (Russia's) actions have proved that they cannot be trusted. Although we knew it."

However, in the future we cannot rule out that cooperation with Iran will be over not only in the arms market, but the energy market as well. And not only in joint nuclear projects, but also in terms of promising development of the rich Iranian oil and gas fields.

But how will the failure of the contract affect Tehran? Iranian leaders do not consider it a tragedy. According to Ahmad Vahidi, "they think that if. . . S-300 will not be provided to us, something will happen. For us, it does not matter. Many of our experts do not approve of S-300 systems." And, as loudly declared by Vahidi, Iran itself is in a position to create such a system.

Is the Iranian side bluffing? Previously media released information that Iran has already acquired S-300 units, allegedly obtained from Russia, Belarus or Croatia. Someone even published pictures of S-300 in Iran, allegedly shot by Israeli spy satellite.

These rumors also were heavily fueled by Iranian news agency Fars that reported that the Islamic Republic had such weapons. However, there are more compelling facts that prove this theory. In April of 2010, at a military parade in Tehran, Iran has demonstrated its S-300. According to the Iranian military, they are "analogue of the Russian S-300, developed by local engineers."

However, the experts interviewed by Pravda.ru do not believe that Iran has managed to establish S-300 similar to the Russian version. "In order to produce a similar system, Iran will need another 20 - 30 years. It regularly reports about development of the new models of weapons, but in reality it is usually only the remakes of old designs," said Ivan Konovalov.

Another military expert, Alexander Khramchikhin, agrees with him. "Samples of S-300 featured in the parade in Tehran are Chinese versions of S-300. This is a Chinese variant of Russian air defense system. As you know, China has not come up with anything new here and in recent years has been actively engaged in counterfeiting foreign, particularly Russian, arms.

The Chinese version of S-300 certainly cannot serve as a complete substitute for the Russian air defense system. Without it, the chances of Iran to reflect the possible impact from the outside are equal to zero," summed up Khramchikhin.