Moscow to drown in its own garbage in several years 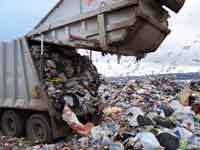 The garbage catastrophe in Moscow can occur already during the next several years. The situation can be described as catastrophic indeed: giant landfills in the Moscow region, where up to 80 percent of all garbage from the city is discharged, will reach the ceiling by the end of 2012. Even the construction of a dozen of waste burning plants will not solve the problem. Specialists say that the city must develop complexes to process, burn and utilize garbage in the Moscow region. Ecologists believe, however, that the garbage collapse is a far-fetched notion.

Moscow produces 5.5 million tons of garbage every year. Four million of that amount - 81 percent - is buried in spoil disposals outside the city. Twelve percent of solid waste is destroyed by burning, and six percent is processed. However, there are technologies that can reverse the proportion to process most of the waste.

In the Moscow region, there are 37 disposals of solid waste. They annually accept seven million tons of garbage from Moscow and the Moscow region. There are many unauthorized landfills in the region as well. Ecologists call them "ecological time bombs." No new waste disposal facilities have been built in the Moscow region during the recent 20 years.

In foreign countries, they use three basic methods to get rid of garbage: to bury and forget, to process recyclable materials and to burn. The first method is the most popular one in Moscow. The second one is poorly developed and requires considerable investments. The third one finds support with the authorities and triggers massive protests among the population and ecologists.

Some ecologists believe, though, that the issue of the garbage catastrophe in Moscow is far-fetched. They claim that the issue is used to justify the constriction of hazardous waste incinerators. The talks about imminent garbage disaster appeared some 20 years ago. If it occurs in 2012 indeed, it is not clear how trash burning factories will be able to solve the problem because the will be built by 2015 at best.