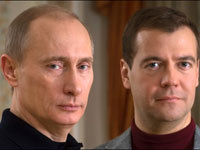 Russian President Dmitry Medvedev, as a common intellectual, enjoys reading. News agencies reported that one of the latest books, which the Russian president purchased, was a novel by Stieg Larsson, "The Girl With The Dragon Tattoo." Medvedev is not alone here: Larsson's books are hugely successful in the world, over 40 million copies of his novels have been sold worldwide.

Medvedev obviously prefers Russian classical writers too. The list of his favorite authors starts with Chekhov, Bunin and Dostoyevsky. Medvedev likes reading modern writers too, both Russian and foreign ones, for example Pelevin and Murakami.

Vladimir Putin enjoys reading books on history and politics. Putin likes Sergei Witte and philosopher Ivan Ilyin - he sometimes quotes the latter in his speeches. It is worth mentioning that Putin personally financed the construction of tombstones on the graves of Ivan Ilyin and writer Ivan Shmelev, who died in emigration, but were reburied in Russia
several years ago.

Persian poet Omar Khayyam became Putin's most unusual fondness in literature. The prime minister enjoys reading his short poems and even puts down some lines in his notepad.

Barack Obama, one of the most intelligent US presidents during the recent 50 years, is fond of literature as well. If asked about his reading preferences, he usually responds with whole lists that include American classical authors, presidents and modern writers. During his childhood, Obama liked a fairytale by Maurice Sendak "Where The wild Things Are." Several generations of American and British people grew up with that short tale, but the book has never been published in Russia.

Obama and his daughter Malia have recently read the book by Yann Martel titled "Life of Pi" which is also a story about a boy and a monster. The book has become one of the most popular novels of the 2000s. Obama said in one of his interviews that it was a "wonderful book" that enthralled his daughter.

"There are whole chapters that really have to do with Hinduism, Christianity. There is a lot of philosophical stuff in there, but for some reason she (Malia) is hanging in there," he said.

Obama was so impressed with the story that he even wrote a letter of gratitude to the author.

French President Nicolas Sarkozy does no consider reading as one of his biggest hobbies. Sarkozy prefers cinematography and fitness. He respects Sylvester Stallone and French comedies. As for books, he was ridiculed in 2006, before he became president, for his disdain to "La Princesse de Cleves" (The Princess of Cleves), a novel by Madame de La Fayette which was published in 1678 and is taught in most French classrooms.

"A sadist or an idiot, up to you, included questions about 'La Princesse de Cleves' in an exam for people applying for public sector jobs," he said.

After he wedded Carla Bruni, who immediately began to improve her husband's image, Sarkozy said that his favorite book of all times was "The Red And The Black" ("Le Rouge et le Noir") by Stendhal.

David Cameron, Britain's Prime Minister, says that his favorite book is "Good-Bye to All That" by WWI poet Robert Graves. The book, a memoir, was published in 1929, when Graves was 33. Cameron also respects Nassim Nicholas Taleb, the author of The Black Swan.

The Black Swan Theory or "Theory of Black Swan Events" was developed by Nassim Nicholas Taleb to explain: 1) the disproportionate role of high-impact, hard to predict, and rare events that are beyond the realm of normal expectations in history, science, finance and technology, 2) the non-computability of the probability of the consequential rare events using scientific methods (owing to their very nature of small probabilities) and 3) the psychological biases that make people individually and collectively blind to uncertainty and unaware of the massive role of the rare event in historical affairs. Unlike the earlier philosophical "black swan problem", the "Black Swan Theory" (capitalized) refers only to unexpected events of large magnitude and consequence and their dominant role in history. Such events, considered extreme outliers, collectively play vastly larger roles than regular occurrences.