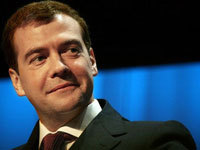 Russian President Dmitry Medvedev celebrated his 45th birthday on September 14. Medvedev spent his birthday with his family in Sochi. The president was not planning any large-scale events for his special day, Vesti reports with reference to the press service of the Kremlin administration. In the meantime, Russian officials and politicians found themselves in an awkward situation: many of them do not know what to give to the high-ranking birthday man in light of Medvedev's recent anti-corruption activities.

In one of his interviews, Medvedev said that he considered birthday a family holiday and added that he was hoping to give more attention to his family members on his special day.

"My work does not allow me to spend much time with my family, and this day (birthday) would be a good reason to get together," he earlier said.

The president also said that he likes to receive presents, although he values attention more.

"The attention from the people dear to me is most important. If you realize that your closest person tries to make your birthday special - this is what makes you the happiest man," Medvedev said.

Two years later, Medvedev became first deputy chairman of the government. In March of 2008, at age 42, he took the office of the Russian president and became Russia's youngest leader during the recent 100 years. Medvedev is included on the top five list of the youngest leaders in the world. The presidents of all post-Soviet states are at least eight years older than their Russian counterpart. As for G-20 and G-8 leaders, there is only David Cameron, the British PM, who is one year younger than Medvedev.

Speaking about his character, Medvedev once acknowledged that he had not become a "political animal" during his career in politics.

"I don't have a feeling that I have turned into a person for whom publicity has become a drug. There is this category of politicians, who are referred to as "political animals." I do not feel that I have become one. Even if my last name is Medvedev [a derivative from the word 'medved' which translates from Russian as 'bear' - ed.], I have not become an animal at this point. It's not one of my physical needs - to constantly be in the spotlight," Medvedev said in an interview.

"At the same time I have definitely changed, for I would not be able to do what I'm doing otherwise. I can be cruel, but criticize myself for it afterwards. I have become more loyal and tranquil to some things, but it happened because of the things that I have to do," he said.

Medvedev also said that he did not even think that he would become the president when he came to work in the White House. He recollected the words, which then-president Vladimir Putin said to him: "You can't even imagine how it would change your angle of sight."

He repeated Putin's words when he was speaking about being tough in politics.

"When they now urge Russia to show more flexibility, I guess I would take this piece of advice some ten years ago. Now I can not. It's not because I became a big boss. My angle of sight has changed. If we had not taken tough positions on some issues, we would have still be treated as a third-rate country," he said.

Speaking about his predecessor and their current teamwork, Medvedev said:

"I would not like people to eventually perceive me and Valdimir Putin as elderly leaders of the Political Bureau of the Communist Party of the Soviet Union, who would appear on the Mausoleum tribune wearing identical coats and hats, making it impossible to distinguish who of them was Leonid Ilych and who was Mikhail Andreyevich."

Russian politicians and officials found themselves in a confusing situation. On the one hand, the president declared war on corruption and took efforts against expensive gifts and bribes on duty. That is why it would be provocative for officials to give something pricy to the president. On the other hand, it is impossible to ignore such an important anniversary. Many Russian officials decided to simply send telegrams to Medvedev.

Vladimir Zhirinovsky, the head of the Liberal and Democratic Party of Russia, believes that it is not nice to give any gifts to president.

"We will send him a telegram on his birthday. A gift is a vestige of corruption! I am in the opposition in the long run, so what kind of gift can there be?" Zhirinovsky said.