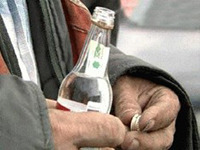 Frequently drinking and smoking Russians should pay more to the state than those who do not abuse these habits and lead a healthy lifestyle. This is the opinion of the Minister of Finance Alexei Kudrin, who offered to force smokers and alcohol consumers to pay more money to the government through an increase of excise taxes on these products.

This makes smokers and alcoholics the saviors of the state.

"This is for people to know: those who drink vodka and smoke will contribute more to the state," said the minister.

But besides this sarcastic wording of the new-old fiscal idea, socially responsibility Kudrin said that raising excise taxes is also one of the measures of the state to combat alcoholism and smoking. If you smoked a pack of cigarettes, then you contributed more resources to address social problems: support of demography, development of other social services, support of fertility," said Kudrin.

However, none of the said budget items are directly related to the receipt of the budget revenues from excise taxes on tobacco and alcohol. But Minister Kudrin transferred the message accurately. The state will take advantage of smokers and alcohol consumers.

Over the past four years, excise taxes for tobacco products have doubled, and over the last six years they grew seven-fold. Since the increase has been gradual, it was not particularly noticed by the population. Besides, vodka and tobacco products are those of inelastic demand. This is particularly true of tobacco, which will be consumed through savings on other goods.

Experts fear growth of the black market of alcohol. In the first quarter, vodka sales have fallen by about 10%. 35% of alcoholics were lost to the legal market. Half of them went to surrogate market; some of them started drinking illegal port, says Vadim Drobiz, the director of research of the federal and regional markets for alcohol (TSIFRRA). Therefore, the effect of growth of budget revenues from excise taxes will be short-term, since the fall of volumes on the legal market will bring decrease in the volume of collected excise taxes.

Nevertheless, The Finance Minister promised to return to this question annually, until the results expected by the Ministry are reached.

In total, tax and non-tax measures proposed by the Finance Ministry for 2011-2013 could bring over a trillion rubles to the budget. Among the measures proposed by the ministry starting January 1 of 2012, it was suggested to establish a uniform export duty on oil products in Russia. Starting 2012, the tax rate on the extraction of minerals (MET) for oil could grow by 6.5% and from 2013 by another 5.4%.