Another report prepared by Freedom House said that the year 2009 was the gloomiest year for the Russian democracy during the recent decade. As a matter of fact, there is nothing new in the report. The only new thing is lower points for democracy in Russia. If Freedom House runs out of its points, how is it going to assess the condition of the Russian society then? 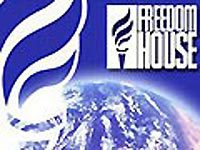 Freedom House published its regular report about democracy and human rights titled “Nations in Transit.” The report is dedicated to the countries of Eastern Europe and the former USSR. The organization uses seven criteria for its assessments, each criteria is then calculated into a rating between one and seven - one (1) being the highest and seven (7) the lowest. The criteria are as follows: the election process, the civil society, independent mass media, state democratic administration, local democratic administration, independence of the legal system and corruption.

Russia Today: How the Russian sole can save the American empire

The US-based watchdog organization believes that the situation with democracy in Russia is close to the worst possible variant. According to the report, Russia received 6.14 points in 2009, which is 0.03 points higher than in 2008.

Freedom House has run out of some of its points. It gave Russia 6.75 points for the election process in 2009, 6.50 – for state administration and corruption, and 6.25 – for independent media.

We have to say here that Freedom House has not published one single report during the recent decade, which would point out positive changed in Russia. US human rights activists persistently state from year to year that the situation with human rights and democratic freedoms in Russia gets worse and worse. As a result, the situation in Russia in 2009 turns out to be the most terrible one of all 29 countries indicated in the report.

Analyzing such biased reports is already considered bad form in Russia. There is absolutely no objectivity in such reports. They pursue solely political goals, although they can hardly be successful at this point. Even ardent critiques of the Russian authorities do not treat assessments from Freedom House as reliable arguments.

Freedom House’s estimations of Russia are based on opinions of Russian human rights activists who have strong ties with the United States. As a matter of fact, they were simply translated into English without any critical approach.

For example, the most recent report says a lot about regional elections in October 2009, which received one of the lowest points. Nothing has been said about the fact that the statements about supposed falsifications were unfounded: only several cases are pending at courts.

Freedom House makes people treat its reports with skepticism, to put it mildly. One may easily guess that it will give low marks to Russia next year too.