Vladimir Putin gave a traditional interview to French journalists prior to his visit to Paris. In the interview, the chairman of the Russian government said that the Western model of democracy does not exist per se. Below you can read several most intersecting excerpts from Putin’s interview. 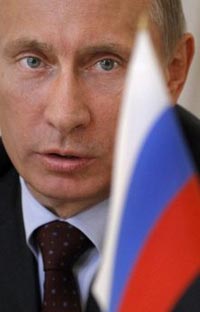 “Can you tell me what it is – the Western model of democracy? France has one model of democracy, the USA has another one. A French politician told me once: one can not do anything at the elections in the USA without money – whether they are elections to the Senate or Congress, not to mention the presidential election. There is nothing to do there without a sack of money. So what is that democracy about? Is it democracy of those who have a lot of money? The USA is a presidential republic, Great Britain is a monarchy. All of that are elements of democracy, but what kind of democracy? There is no single model of “ Western democracy ”. It doesn’t exist.

“Tony Blair is a good friend of mine. His party won the elections under his leadership. Afterwards , Laborites decided that he should step down . Mr. Brown immediately took his position and automatically became the prime minister, without elections. What is it ? Democracy ? Yes , it is . That is the way it is – good or bad.

“I’ve had many discussions with American colleagues. I asked them how could it happen that the majority of US citizens voted for one person, but another one took office as president owing to the system of electoral delegates. The Americans answered: you do not need to interfere, we are used to it, and that’s the way it will be. We do not interfere. Why do you think that you can interfere with us? We will solve our problems alone.”

“Georgia has a very long ground border with Russia. People died as a result of the criminal action launched by President Saakashvili two years ago. Russia was forced to defend the lives of its peacemakers and the citizens of South Ossetia. We stopped 15-20 kilometers far from Tbilisi. We stopped there not because we could not enter Tbilisi – we stopped because we didn’t want to do it. We didn’t want any military action at all. I hope there will never be another armed conflict between Russia and Georgia, never.”

“You know, I’ve been going in for judo since childhood. It would be strange if I was trying to conceal that. I have a judo black belt. It’s one of the biggest lifeworks for me. When it attracted so much attention in the media, I was very surprised because I did not see anything unusual about it. It’s routine for me – the things that I do every day. Well, not every day – every other day. There was a period when I was getting ready to take part in the judo championship of the Soviet Union. I had daily training sessions in the national judo team.”

“First off, I just live and work the way I can. I do the things that I like to do. There’s one life and one has to learn to enjoy it despite various limitations. Secondly, speaking of the personality cult, I think that our citizens know exactly that personality cult is not just attention to one person. It also includes countless violations of law and repressions. I can not imagine, not in my wildest dreams, that it can happen again in modern-day Russia. The Russian society today is mature enough not to let the 1930s, 40s and 50s repeat again.”

About democracy in Russia

“Authorities always try to look better than they really are in the whole world. They try to somehow restrict opportunities of mass media. As a rule, authorities can not do it in a country with a well-developed civil society. A lot of things need to be changed and improved in the Russian political system, but this is a long process that takes place the society grows.

About next presidential election in Russia

“Me and President Medvedev think about it, of course, but we agreed not to pay much attention to this problem. The decision will depend on how we work on our positions.”

When asked which country Putin will support during the Word Cup, the prime minister dropped a curtsey to the French and the French team, which, unlike Russia, will go to South Africa to enjoy the game of football.