Poverty in Russia Disappears in a Remarkable Manner

The number of households with the income level below the poverty line in Russia dropped from 38 to 3 percent in 1998-2009, experts of the international monitoring of economic conditions in Russia (RLMS) said in their latest report. The study embraced an extensive time period of 15 years. Three percent is the lowest index reported during the entire period of observations. 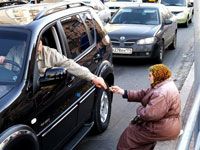 Poverty in Russia Disappears in a Remarkable Manner

The level of extreme poverty, when family income measures 50 percent and lower than the living wage, made up 1.1 percent, which is also the lowest index. In 2008, the level of poverty made up 4 percent.

Russia Today: Kidnapping - an easy way out of poverty?

The research says that Russia has achieved very good results in the struggle with poverty. The situation among most vulnerable layers of the population – children and the seniors – has improved. The number of children living in extreme poverty dropped from 3.1 percent in November 2008 to 1.4 percent in November 2009. Poverty among senior citizens deceased 2.5 times – from 1.5 percent to 0.6 percent. Only one of 1,000 seniors lives in a household with the income of 50 percent less than the poverty line.

As for Russian regions, the lowest level of poverty has been reported in Moscow and St. Petersburg (1.3 and 1.6 percent respectively). The number of poverty-stricken children is the largest in Siberia and the Far East (9.8 percent).

The level of the total real expenditure is currently 22 percent higher than the peak level registered in 1993 and 1994, which most likely reflects the traditionally high growth of Russian prices and tariffs.

However, the most important criterion of poverty – the share of spending on food in a family budget - has been decreasing steadily. The average share of the budget on food dropped to 44 percent: the Russians used to spend 73 percent of their income on food in 1993-1994.

The ownership of items used in households during a long period of time shows that the living conditions of many Russians have worsened. Over 96 percent of Russian families own color TV-sets. Practically every other family has a personal computer, although in 2000 a PC was owned by every fourth family. The share of those having access to the Internet has increased during the recent year: 44 percent have a part-time access to the Internet, 31 percent have Internet connection at home. The share of households possessing cars or trucks has increased too, but the share of those having country houses has dropped to the level of 1994, the Rossiiskaya Gazeta newspaper said.

Answering a question “Are you happy with your life in general?” 44 percent of respondents said at the end of 2009 that they were completely or generally happy. Eight years ago the same answer to this question was received from 24 percent of the polled. Thirty-three percent of the Russians are not quite happy with their lives or not happy at all. In 2000, the percentage of dissatisfaction made up 59 percent .

Quantitative analysis of interconnections between happiness and income levels is one of the most disputable, albeit perspective and interesting directions of social research. In the beginning of the 1970s, Richard Easterlin, a Professor of Economics, discovered a paradox which was subsequently named in his honor.

The Easterlin Paradox is a key concept in happiness economics. Easterlin found that within a given country people with higher incomes are more likely to report being happy. However, in international comparisons the average reported level of happiness does not vary much with national income per person, at least for countries with income sufficient to meet basic needs.

Recent research has utilised many different forms of measuring happiness, including biological measures, showing similar patterns of results. This goes some way to answering the problems of self-rated happiness.

In 2008, economists Justin Wolfers and Betsey Stevenson, both of the University of Pennsylvania, published a paper where they reassessed the Easterlin paradox using new time-series data. They conclude like Veenhoven et al. that, contrary to Easterlin's claim, increases in absolute income are clearly linked to increased self-reported happiness, for both individual people and whole countries.

The statistical relationship demonstrated is between happiness and the logarithm of absolute income, suggesting that above a certain point, happiness increases more slowly than income, but no "saturation point" is ever reached. The study provides evidence that happiness is determined not only by relative income, but also by absolute income. That is in contrast to an extreme understanding of the hedonic treadmill theory where "keeping up with the Joneses" is the only determinant of behavior.

What to expect from Putin's Address to Federal Assembly on September 30? Alexander Shtorm
Columnists
September 2022: Where are we (going)?
Russia
Putin grants Russian citizenship to Edward Snowden