A group of Russian experts arrived in Seoul, South Korea, today to study the results of the investigation of the sinking of the Cheonan corvette, which blew up and sank in the Yellow Sea on March 26, Itar Tass reports. 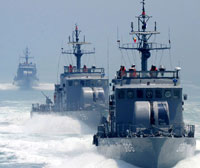 A spokesman for the defense ministry of South Korea said at a news conference that the specialists would examine the fragments of the sunken vessel recovered from the bottom of the sea.

A group of military and civil experts from South Korea, the USA, Britain, Australia and Sweden said at the end of May that the Cheonan had been destroyed as a result of the torpedo attack. The torpedo, the experts said, was fired from a North Korean submarine. They demonstrated the torpedo pieces supposedly retrieved on the wreck site from the sea floor. It was said that the marks on the fragments of the torpedo indicated its country of origin – North Korea.

South Korea also invited Chinese experts to review the results of the international expert commission. The South Korean authorities believe that the issue of North Korea’s responsibility for the destruction of the SKorean naval boat must be submitted to the Un Security Council. Russia and China are included on the list of its five members and hold the veto right at the organization.

A source at the General Headquarters of the Russian Federating Armed Forces said that the investigation of the incident with the Cheonan would have been more objective if Russian observers had taken part in the process from the very beginning.

In the meantime, South Korea continues to hold military drills to set its troops on high alert in case of possible attack from the North. North Korean officials stated that they refused to observe the agreement with the South about the prevention of inadvertent clashes between the navies of the two countries. Pyongyang also said earlier that it had cut all ties with the South.

The development of the crisis largely depends on the positions of other nations that play key roles in the region. The USA, which has a 28,000-strong contingent in South Korea, fully supports its ally. US official stated that the United States would conduct naval drills with the participation of the South Korean navy. However, China, North Korea’s guardian, is not willing to sing in the choir with the USA and its allies. A high-ranking Chinese official stated that it was a very complicated issue and that china was studying the information arriving from various sources.

“The results of the investigation conducted by the international expert team have raised a number of serious questions. One may say that Russia and China have not believed those results. There are some facts which do not match the whole story. For example, there are only soldiers, and not even one officer on the list of those killed in the sinking of the South Korean vessel. Moreover, the victims did not have either contusions or bone fractures, as it usually happens during torpedo attacks. The North Korean brand on the torpedo was made in the Southern, not the Northern style,” Konstantin Asmolov, a chief scientists with the Center for the Korean Research of the Russian Academy of Sciences said.

Some experts believe that Russia is getting involved in the conflict between the two Koreas.

A group of Russian experts will have Russia involved in it, which is not desirable. China is just waiting, while Russia is being active. However, Russia will not submit the problem for discussion at the Un Security Council until it receives the confirmation of North Korea’s involvement in the destruction of the vessel.