Russia and The Media

During the visit of President Dmitry Medvedev to Scandinavia this week, the public image of Russia was referred to on numerous occasions. It is clear that today, while the international media continues to attempt to paint a picture of a marauding, savage and dangerous monster to the East, this image is tied to myths which remain in the mist of the Cold War…and history. 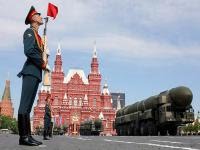 Russia and The Media

The Soviet Union provided a wonderful “them” to justify the existence of “us”, namely NATO, that myriad cabal of sycophantic lackeys which allowed their foreign policies to be passed to Washington’s arms lobby, which caters for those who make a living out of selling weapons of mass destruction.

The demonology in the western press during Soviet times was as lurid as it was ridiculous, complete with stories of eating babies, surly and rude service, inedible food (“Russian food is an egg floating in tepid water”) and an unhappy, nasty and spiteful people just dying to exterminate all living beings west of the Iron Curtain.

Those who actually bothered to go to the USSR or to contact its citizens saw that the truth lay somewhere else. And those who follow what really happens and not that insipid package called “The News” every day in the printed press or on the television screen know very well that the Soviet Union did not “collapse” (it entered a process of voluntary dissolution as catered for under its Constitution). They also know that Russia was not the aggressor in the Georgia War in 2008, rather that Moscow launched a contained and sensible strategy to contain the Devil after the savage attack by Georgian troops (backed by their US advisors) against Russian civilians in Ossetia.

While the Western Press launched a campaign of lies and hatred and then, one day into the war, claimed that “Russia has lost the media war”, there were a few international newspapers, PRAVDA.Ru among them, that fought back and which told the truth. So the demonology and the hostility is still there from one side.

And what of the Russian side?

As Dmitry Medvedev said, “a smile”. Far from the marauding and furious, savage brown bear, the heart and soul of the Russian people is and always has been far more like that of a Teddy Bear. Fun-loving, kind, family and children-orientated. Happy. Respectful, polite. Colourful, cultured, competent and capable. Efficient and effective. Nice.

For Dmitry Medvedev, the image of Russia should be “The face that I have now, smiling”, as he stated before his arrival in Denmark. Qualifying that further, “smiling and modern and young in a sense that Russia is a fast growing economy”. For Russia’s President, the onus is to create a society in which people can develop, earn high incomes, organize their working time and enjoy their leisure time.

Regarding human rights, it is amusing that among the countries that level accusations at Russia are those who took part in the illegal act of butchery in Iraq, in which international law was disrespected, in which the UNO was derided, in which every fibre of international diplomatic custom was insulted. There are also those who harbour criminals, murderers and terrorists.

For this reason, as far as human rights are concerned, Dmitry Medvedev was succinct: Russia is ready to discuss human rights with other countries but will solve existing problems on its own.

True, journalists were killed in Russia in 2009. Worldwide, a total of 68 journalists were killed last year, three of these in the Russian Federation. Or actually, two. One was the Chechen Natalya Estemirova (murdered by Chechen mafia elements), another was Anastasia Baburova, also in an incident connected to Chechnya. (Why is the common denominator always Chechnya? Could it be the wind?) Telman Alishaev, anchor in the religious TV program Peace in your Home, was shot in Dagestan in 2008 and his death has been included in the figures for 2009.

So let us not overdo the freedom of the press story because it is utterly unjustified. The author of this piece has been connected to the Russian Press since 1999, both online and printed, newspapers, magazines, web-blogs, internet newspapers…you name it…and has never received a single directive as to what can and cannot be published, apart from “The Truth” (Pravda).

Those who know Russia, those who have bothered to visit Russia, know the truth. Those who read the lies and half-truths in the media package sold as news are unfortunately brainwashed. So let us not judge Russia on hearsay, let us visit Russia and find out for ourselves. Those who come here will find happy and friendly people, will have a comfortable and safe stay, will discover the marvels of Russian cuisine (perhaps the more varied in the world) and will certainly go back home with a different attitude.