Latest data from opinion polls show that Russia’s 18-25 age group is motivated, happy and optimistic for the future. To be more precise, almost three quarters of the young adults from this age group declared that they were content with the way their lives are running in the Russian Federation of Dmitry Medvedev and Vladimir Putin. 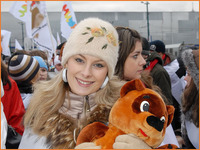 The Public Opinion Foundation poll entitled “Generation Y: A social portrait of modern youth aged 18-25”, summarized by Interfax, reveals that this age group shows a very high rate of approval for its lifestyle and hopes for the future in Russia today.

The results of the poll show that Russia’s youth is confident and looking forward to the future, with an approval rate of 73%. 38% state they are optimistic (against 27% who claim they are pessimistic) and 40% believe their situation will improve in future (while just 23% believe the contrary).

Regarding Russia’s leadership, both President Dmitry Medvedev and Prime Minister Vladimir Putin both enjoy huge rates of popularity unequalled in the countries which like to criticize Russia. In the case of President Medvedev, 75% of the 18 to 25 age group express approval as against 68% in the over-25s and for Vladimir Putin, the approval rate is 82 and 75% respectively.

50 per cent of this age group state that they consider the Government’s performance positive and 62% declare that if a Parliamentary election were to be held now, they would vote for the Government Party, United Russia.

As far as priorities for the future are concerned, in first place, according to the report, was unemployment, the creation of new jobs, combating high prices, poverty and increasing incomes.