What are the effects of the Icelandic monster volcano Eijafjallajokull on the Russian Federation, after creating over one billion dollars of losses in less than a week mainly on western European airlines, at a time when they could least afford it? Wind changes early Tuesday threaten to blow the toxic ash cloud towards the United States of America. 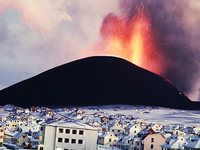 Share prices of several companies have started to plummet: Air France-KLM has opened Monday 4.63% down, Lufthansa showed a 4% decrease, British Airways lost 3% in value and SAS, 2.4%. The same source quoted Olga Panteleeva, Director of the Analytical department of the Russian agency Aviaport, who considered that “A lot will depend on the passengers – how many decide to return tickets and how many will wait for later flights”.

It will also depend on how the volcano itself behaves. While Monday registered a new phase of more steam and less ash, coupled with a south-westerly wind coming up from the Atlantic Ocean, early Tuesday morning, a fresh outburst from the volcano is sending another surge of ash-clouds eastwards, as the volcano itself is hit with an Arctic wind blowing from north to south, forcing the cloud downwards towards the USA.

In total, 475 European flights running to and from Russia had been cancelled by 14.00 GMT on Sunday, while 12,000 Russian citizens have been left stranded in different European countries. Oleg Mikhailov, a spokesperson for Aeroflot, has stated that Russian passengers should try to get to southern European airports, which are still operating. Large aircraft with the capacity to carry larger numbers of passengers have been deployed by Aeroflot to carry Russian passengers, who had been booked on other airlines, back home