Latest studies from a reputable research center point towards the fact that Vladimir Putin delivered on his promise ten years ago to put the self-confidence back into Russia and Russians. The confidence of Russians in the growth and increasing power of their country is evident. 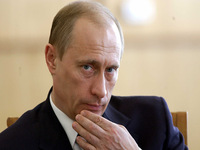 The research was carried out by the Levada Center and released in a report written by Lev Gudkov, entitled “Vestnik obshchestvennogo mneniya” in which the research on how Russians view their country is revealed.

What is patently obvious is the fact that Vladimir Putin’s promise to deliver on confidence in the nation has been achieved. Whereas in 1999, just 14 per cent of Russians considered their country to be a great power, while 72 stated it was not (the Eltsin legacy), the figure in 2008 was 76 per cent stating that Russia is a great power and only 19 saying it was not.

Regarding the development of Russia compared with other countries, in 2008 only 29 per cent stated that Russia lags behind other developed countries whereas in 2000, 50 per cent of those taking part in the opinion poll agreed with the statement.

The research also reveals that growing numbers of Russians consider that their country is among the leading group of nations and that it is developing well.

Amongst the factors considered important for gaining respect in the international community, the following were mentioned: a high level of well-being among the citizens, a high level of development of science and technology, military strength and nuclear arms, human rights, a highly developed culture and having natural resources.

The point is that the Russian Federation, the epicentre of the Soviet Union, had to rethink and replay its role from one decade to the next. Just like other nations with changed geopolitical circumstances, this took time but in Russia’s case, little over ten years, because the centralised authority of the State was re-imposed swiftly after it became apparent that not all players in the international community were willing to help Russia but rather, were vying for her resources.

With Putin came the adage “Russian resources are for Russia and the Russians” and the hundreds of billions of dollars from these rightfully belong to the central Government to distribute as it sees fit. The way forward is for Russia to build on the tremendous advances and victories achieved by the Soviet Union, when Moscow pooled her resources with her neighbours and distributed her wealth and knowledge half way across the globe.

No other nation made such vibrant and heroic strides in 90 years as Russia/the USSR/the Russian Federation did and a huge part of the feelgood factor for Russians today is feeling OK with their Soviet past, accepting it as part of their history (like all nations there were positive and negative aspects of it), and assuming and digesting the bad along with respecting and being proud of the many good points.

Like any other nation anywhere else on Earth, Russians have the same values as anyone else. And Vladimir Putin’s decade in power has been nothing but positive in bringing these out.