The terrorist attacks in Moscow subway and explosions in Kizlyar have revived a dormant discussion about toughening the responsibility for terrorists and their accomplices. Representatives of relevant committees of the State Duma and the Public Chamber told Pravda.ru what legal tools could be used to fight this evil. 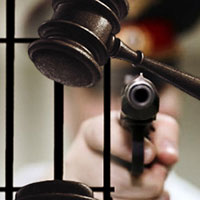 In the last few days several large-scale terrorist attacks ripped through Russia. Female suicide bombers set off explosive devices in Moscow subway at Lubyanka and Park Kultury stations. As a result, 39 people died and over 90 were injured.

In a Dagestan city of Kizlyar on March 31st another twin explosions targeting law enforcement officers were set off. As a result of the explosion equal to 200 kilograms of TNT, 12 people died, including Vitaly Vedernikov, head of the city Department of Internal Affairs. Both explosions in Moscow and Kizlyar were set off by suicide bombers.

The reaction was quick. The State Duma and the Public Chamber raised an issue of introducing death penalty as a capital punishment for terrorist attacks resulting in death of people. There were new requests to suspend the moratorium for death penalty for criminals who committed serious crimes.

In 1996, before joining the European Council, Russia undertook a number of obligations, including abolishment of death penalty. Although the protocol for banning death penalty has not been yet ratified, the moratorium for capital punishment is in effect.

Gennady Zyuganov, the leader of the Communist Party, was among the first officials to suggest reenactment of the capital punishment for terrorists. “We stated long time ago that the country is not ready for the ban. The country has to reenact death penalty for serious crimes. It is hard to imagine a worse crime than the one committed on Monday,” he said. He believes that those who financed and ordered this crime, and “programmed people who go and eliminate other people without thinking twice” should be punished in the first place.

The Federation Council picked up the idea. Anatoly Lysakov, head of the Legal committee of the Federation Council, told journalists that in the near future amendments will be made in the existing criminal legislation stipulation death penalty for organization and implementation of terrorist attacks.

Alexei Alexandrov, chair of the Federation Council Constitutional Legislation committee, clarified that introduction of a new article of the Criminal Code providing for death penalty will not mean that the moratorium will be suspended. “An article of the Criminal Code is one thing, and moratorium is a law enforcement practice, it is a completely different thing,” he explained.

Alexander Moskalets, First Deputy of the Committee on Constitutional Law and State Construction, told Pravda.ru that life sentence is a bigger punishment for suicide bombers than death penalty. “Executors of terrorist attacks are suicide bombers. It sounds cynical, but life sentence is better for them. The Criminal Code doesnot have a capital punishment other than death penalty. Today we encounter situations where human life turns into a crime implementation technology.”

Nikolai Leonov, former head of the KGB analytical department, also spoke about hopelessness of death penalty introduction. “They are suicide bombers, they choose death penalty themselves. Therefore, death penalty does not mean anything for them. It is a vain pursuit. Do not suggest things that are obviously unnecessary.”

Pavel Krasheninnikov, head of the State Duma's Civil, Criminal, Arbitration and Procedural Law Committee agrees with Moskalets and Leonov. “It is pointless to introduce death penalty because suicide bombers are looking for death. It will not hold them back,” he said, mentioning that life sentence was sufficient.

He also said that those with life sentence do not say anything for the first couple of years, but later they can reveal useful information, and not only about their own crimes. “At the moment we have to make every effort to solve crimes and prevent terrorism, “he is convinced.

Andrei Przhezdomsky, a member of the commission of Public Chamber of the Russian Federation on public control over activity of law enforcement bodies, believes that the situation requires toughening of the punishment for terrorism because “struggle with terrorism in on the agenda.”

“For many years we cannot win over this evil. Despite the fact that military actions in the Northern Caucasus are over, terrorists are still very active.”

Andrei Przhezdomsky mentions that as of now, there is no direct anti-terrorist cooperation between the countries-members of the Organization for Security and Cooperation in Europe, there is no full-fledged database of terrorist attacks and terrorists themselves.
“This significantly hinders the struggle. We need to activate opposition to terrorism by toughening sanctions and actively cooperating with our colleagues in other countries, “he said.

It is worth mentioning that the issues of toughening the responsibility for terrorists were also discussed at the meeting of the Russia’s Security Council on Wednesday. In particular, President Dmitry Medvedev suggested thinking about correcting anti-terrorist legislation. “It makes sense to analyze certain articles, including article on terrorism and see how criminal prosecution is implemented in terms of terrorist acts,” he said. He added that it is necessary to pay attention to prevention activities, including those that involve legal tools.