Doku Umarov is the name and the face of sheer evil whom western media outlets refer to as a “rebel leader”, a terrorist chief in Chechnya who has claimed responsibility for Monday’s outrage in Moscow in which 39 people were murdered and over 70 injured. Today a further 12 people were killed and 27 were wounded in Dagestan. Vladimir Putin claims it is a question of honour to bring the perpetrators to justice. 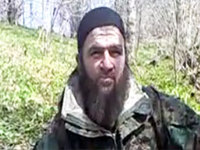 Prime Minister Vladimir Putin has vowed to capture the terrorist elements that perpetrated these two outrages, which together killed 66 people and wounded nearly 100. The pure unadulterated malice behind these attacks has a face: Doku Umarov (Dokka Abu Usman), who claims responsibility for the two Metro bombings in Moscow on Monday morning in the Chechen terrorist website kavkazcenter.

Promising to carry out more attacks, this terrorist threatens to bring the war to the streets of Russia “so you can feel it in your own skin”. In a video message recorded on March 29, he stated that the attacks were a retribution for the actions of Russian “invaders” in Chechnya and Ingushetia.

Russian Prime Minister Vladimir Putin answered by claiming “I am sure we will manage to bring them to justice…and we will drag them from the bottom of the sewers and bring them into the light of day;” he added that it is a question of honour for the security forces to bring these terrorists to justice.

Two more suicide bombings in Dagestan (northern Caucasus) on Wednesday caused the deaths of 9 policemen and 3 civilians and injured a further 27 people, eight of whom are considered to be in a serious condition in hospital. The first explosion took place at 08.42 MSK at a police checkpoint, when the male driver blew up his vehicle killing 2 policemen and a female civilian. The second took place 15 minutes later at the same place, after the emergency services had gathered. A male suicide bomber disguised as a policeman activated his explosive device, killing 7 policemen and two civilians.

The terrorists’ claim has no foundation

While western media outlets are quick to lap up anything and everything which goes against Russia, the fact of the matter is that on March 23, 2003, around 95% of the citizens of Chechnya voted in favour of remaining within the Russian Federation in a free and fair democratic election.

If the Russian security forces are operating inside Dagestan, Chechnya and Ingushetia, it is because these republics are part of the Russian Federation and as such they have every right to be there, scouring these regions for terrorists, agents provocateurs, murders and common criminals to eliminate this scourge once and for all.

Instead of perpetrating the attacks themselves, “leaders” such as this Dokka Abu use young women who have been sold to the terrorists by their own families and who have been brainwashed (often they are mentally debile) into committing suicide. If that is not sheer evil, what is? The truth of the matter is that these “terrorists” have no cause because their own populations do not want them, they have no country because their homeland is Russia and they are Russians and all they are in reality is common criminals who wish to carry on racketeering and trafficking, illicit activities there people (?) have been carrying out for years.

This is the pure truth about Chechen terrorism.