The Church gradually gets closer to the State in present-day Russia. Prime Minister Putin and President Medvedev often attend church ceremonies, and the state delivers valuable objects confiscated during the Soviet era to the Orthodox Church. 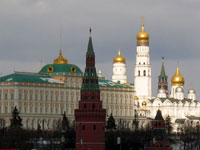 The Russian government has recently declined communists’ request to edit the national anthem and delete the word ‘God’ from its text.

The Communist Party of the Russian Parliament submitted the request at the end of 2009. They offered to edit a line of the new text of the national anthem penned by Sergey Mikhalkov. Boris Kashin, a deputy of the Communist Party of the Russian Federation, has recently raised the issue again and offered to edit the words which can be translated into English as “By God saved as ever our dear native land.”

The deputy claimed that the mentioning of God in the anthem hurts the feelings of atheists. Mr. Kashin said that the word ‘God’ must be replaced with the pronoun ‘us’. The deputy made an inquiry with the State Academic Choir about the possibility to change the anthem. He was told that making a recording of the new version of the national anthem would cost 120,000 rubles ($4,000).

Deputy chairman of the Russian government, Sergey Sobyanin, said that the suggestion to change the text of the anthem must be substantiated with statistical data and other necessary materials.

“The text of the anthem is a whole musical and poetical work. Any editing of this work disregards the historical and cultural context of the anthem creation and can alter the original conceptual direction of the work,” Sobyanin said in his response to the communist deputy.

Mr. Kashin did not give up on his initiative and submitted the bill to the State Duma again. He apparently believes that heaven helps those who help themselves.

The anthem debate intensified in October of 2000 when Yeltsin's successor, Vladimir Putin, was approached by Russian athletes who were concerned that they had no words to sing for the anthem during the medal ceremonies at the 2000 Summer Olympic Games. Putin brought public attention to the issue and put it before the State Council. Putin pressed for the former Soviet anthem to be selected as the new Russian anthem, but strongly suggested that new lyrics be written. The Duma voted on 8 December 2000 to adopt Alexandrov's music as the national anthem. Following the vote, the committee formed to explore lyrics for the national anthem was tasked with finding lyrics for Alexandrov's music. After receiving over 6,000 manuscripts from all parts of Russian society, the committee selected lyrics written by Mikhalkov to become the anthem of Russia.