The Regional Federal Tribunal of the 3rd Brazilian Region granted businessman Boris Abramovich Berezovsky the right to be questioned in London, England, where he lives as a fugitive from Russian justice on charges for the crimes of money laundering, and conspiracy in Brazil If MSI / Corinthians, the largest corruption scandal in the history of Brazilian football. 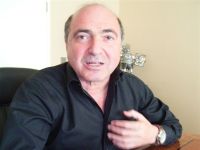 According to the lawyer and Heloise Estellita, who defends Boris Berezovsky, this is the first time that TRF-3 responded to such requests. Boris Berezovsky was appointed as a member of MSI in the Sport Club Corinthians Paulista 2004 to 2007, the "business" that caused the biggest corruption scandal in Brazilian football.

According to the complaint of the Federal Public Ministry, Boris Berezovsky was the owner of the $32 million invested by MSI in Sport Club Corinthians Paulista from 2004 to 2007, "money of criminal origin," according to the MPF.

The fugitive is living in England, where he got political asylum to escape a jail sentence in Russia, where he was born and lived most of his life. In Brazil, he is accused of the crimes of money laundering and conspiracy in the MSI / Corinthians scandal.

"If the country also wants to punish foreigners for transnational crimes, the right to be questioned in the country of origin should be granted," argues the lawyer for Boris Berezovsky, Heloise Estellita.

The lawyer points out that the only similar case was in relation to the crash of the Gol, which went down after colliding with the Legacy. Judge Murilo Mendes allowed the Americans, who piloted the jet, to be able to account for the process in the United States.

For federal judge Cecilia Mello, who allowed Boris Berezovsky to be heard by an English court in London, England, where he lives, the fact that the person in question is abroad and does not have an address in Brazil "does not take away the right to constitutional guarantees which are conferred on any person."

In sentencing, the federal judge said: "The questioning, a sacred right of the defendant, should be guaranteed to all defendants, whether Brazilian or non-resident in Portugal or abroad, especially in the case where there is a well-founded fear for the person in question to come to Brazil, because he runs the risk of being extradited to another country."

In December 2009, Judge Fausto De Sanctis, of the 6th Criminal Federal Court of Sao Paulo, had denied Berezovsky's request to be heard / interrogated in London, where he lives. De Sanctis wanted to personally hear the businessman.

Despite being a personal friend of a former congressman and former prime minister's chief of staff of the Presidency, José Dirceu, and having free movement between the leaders of the PT, which is the party of President Luiz Inácio Lula da Silva, Boris Berezovsky resists coming to testify in Brazil for fear of being arrested as soon as he steps on Brazilian soil, due to an existing arrest warrant against him by Russia.

In Russia, Boris Berezovsky was prosecuted for the appropriation of public money and other crimes. With a petition for detention in Russia, Boris lives in England, where he received political asylum.

Ex-math teacher, Boris Berezovsky, set up an oil and communication empire, taking advantage of the wave of privatizations that followed in Russia due to the dissolution of the former Union of Soviet Socialist Republics (USSR).

Considered to be the henchman of former Russian President Boris Yeltsin, Boris Berezovsky fell into disgrace with the political rise of Vladimir Putin to power in Russia.

The decision of the TRF to allow the testimony of Boris Berezovsky to be done remotely was surprising. The same federal judge Cecilia Mello, the judge in 2007, a habeas corpus seeking the revocation of the detention of those involved, stated: "all foreigners have reported in advance they have no intention to cooperate for the implementation of criminal law. In freedom, certainly make every effort to derail criminal prosecution, and continue the practice of such activities, a circumstance which immediately poses a serious threat to public order and the credibility of justice."