Much is made in the western press about a demonstration in Kaliningrad and something increasingly referred to as a “DePutinization” of Russia, yet nothing whatsoever is reported about the fact that Russian opinion polls, conducted openly and without an iota of manipulation, point towards massive popularity rates for the Government. 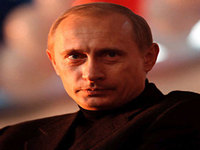 The Western media has a problem, a big problem: now that the Cold War has ended, there is no “them” to justify the “us” so they have been detailed to create one. Africa is a dark place where extreme weather conditions coupled with decades of mismanagement and a legacy of colonialism and imperialism have created situations of extreme poverty.

Therefore it is relegated to the status of “sick man of the world” and the only news that comes out of it is negative, but Africa is not powerful enough to be considered as a foe. Asia? Too far away. Latin America? Idem and anyway it was Uncle Sam’s back garden. In the case of the Soviet Union, this same media had a wonderful adversary: strong, powerful, standing on the other side of the Iron Curtain and right on Europe’s doorstep!

But what happened when the Union dissolved (voluntarily, as catered for under its own Constitution)? Easy! They just perpetuated the myth, even though the story did not exist. Hence the absurd references to Putin as “dictator” (he was democratically elected as President, not once but twice, with a huge margin of popularity, more than Presidents Bush and Obama together). Hence the sheer ignorance displayed in these propaganda outlets (let’s call a spade, a spade) when referring to the Government party, United Russia, as anything other than the party the Russian people have chosen and the party which a vast majority still supports.

In the recent opinion poll carried out by the All-Russian Public Opinion Research Center, the second most popular party was revealed: The Communist Party of the Russian Federation (KPRF), led by Gennady Ziuganov. The voter approval rate? 7 (seven) per cent. In third place the LDPR (Liberal Democratic Party) of Vladimir Zhirinovsky, with 5% and in fourth place, A Just Russia (Spravedlivaya Rossiya, SR) led by Sergey Mironov, with 4%.

And Unified Russia, the party of President Dmitry Medvedev and Prime Minister Vladimir Putin? First, with an overwhelming majority, with a voter approval rate over seven times higher than the second-placed Communist Party, with 54%.

Now where is that statistic in the western media, and where, by the way, is the darling of the western press, Gary Kasparov? In a word, and in answer to both questions, nowhere.

Certainly people protest. They have a lot to protest about. Those old enough to remember can only compare the system before and after (full employment, free housing, free public services, free or very cheap public utilities, excellent education system, leisure time, indexed pensions, versus unemployment, the drama it is to buy a house, the drama of keeping a job, rising prices and all the other utter marvels inherent in the market economy). But this is not the fault of the Government, this is not the fault of Unified Russia.

It is the fault of the global economic and financial system which lurches from boom to bust, which crashes from one disaster to the next and which carries in its wake firms, jobs and livelihoods. If Russia were a dictatorship as they say, the protests would not exist.

It would be interesting to see some truthful reporting in western media circles, and not hype, hysteria and histrionics. The protests and demonstrations are about economics, not politics and if Unified Russia had not run the country so skilfully, things would be far worse than they are.

That is why Unified Russia has an approval rate well over three times higher than the 3 leading opposition parties put together. So when the Russophobic Western media speaks about the “Opposition” as a powerful force inside Russia, why don’t they ask the people how they intend to vote?

Kind of makes a mockery of the utter drivel they write, does it not?